The day we rode up to Yabitsu

David, david, Juliane and me met 8 AM at David’s house and we planned to meet Tom at Sekidobashi and ride up to Yabitsu, the perhaps back along the coast to Kamakura. 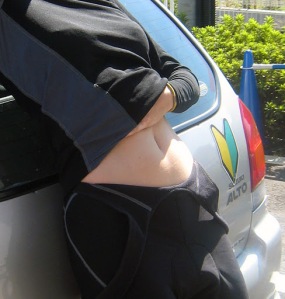 The rugby worlcup final match England against South Africa has started just at 4 AM the same day, so david was without any sleep and promptly he rode over a red traffic light on our way to Futago Tamagawa. So when I heard the sound of a car braking and then flesh on metal I naturally thought that david was still sleeping or just became awake, but in fact in was David who has hit a brandnew black Audi A6. Some scratches on the motor hood. David basically ok, stating that this has not heard as much as the crash with the Taxi some weeks ago. we needed to call the police and make proper filing, then we had a chance to visit the Segafredo at Futago while David was returning home to exchange his broken front wheel. I asked him if he told his wife about the accident. No, he didn’t, he downed two pain killers, told his wife that he had a mechanical problem and off he was to join us for a cup of coffee. 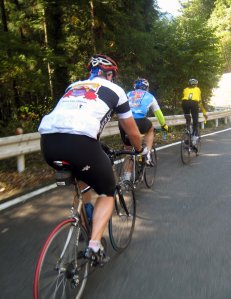 Finally at ten we left. Tom decided in the meantime to do his own training. We made leisurely speed up to Miyagase Lake, where we had a longer break. Total beautiful autumn weather. Kosmos and Kibana Kosmos blooking everywhere. Had a good meal and then we made the approach up to Yabitsu. Really one of my favourite rides, it is like going down two times because going up is mostly so gradual and even some flat stretches, you hardly realize that you are going up.

Midway I accelerated and went up on my own. Then we took some pictures on the top and went down the other side to Hadano where we hoped the train and went to Noborito (David and me) and Yoyogi Uehara (Juliane and david) respectively. Most beautiful day, I felt so happy on the road. Probably radiated happiness.

Since some time I have a blog on my own where I post photos and stories. However I found that I have two completely different group of people reading my blog [if it is read at all]. One group consists of my family, my relatives and my friends and they are mainly interested in the stories about my family and in particular about our kids. The other group are bike riders from the area, as I write a lot about the rides I do on the weekends and the races I attend.

After all I came to the conclusion that it might be better to divide this blogs into two. And give the other riders also the possibility to add blogs, posts photos etc. on this blog.

So this is the start.