You’re wondering now what to do……

…now you know this is the end. 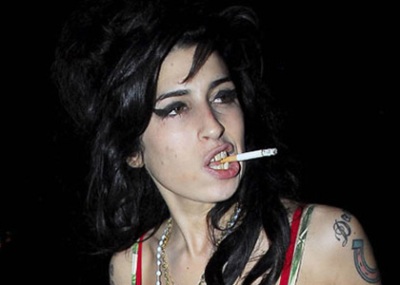 http://www.youtube.com/watch?v=bqtfl0gt5fM
http://www.bbc.co.uk/news/entertainment-arts-14264245
Not related to cycling at all but still so sad.

Here are some more photos from David’s collection about the Transalp 201 tour. 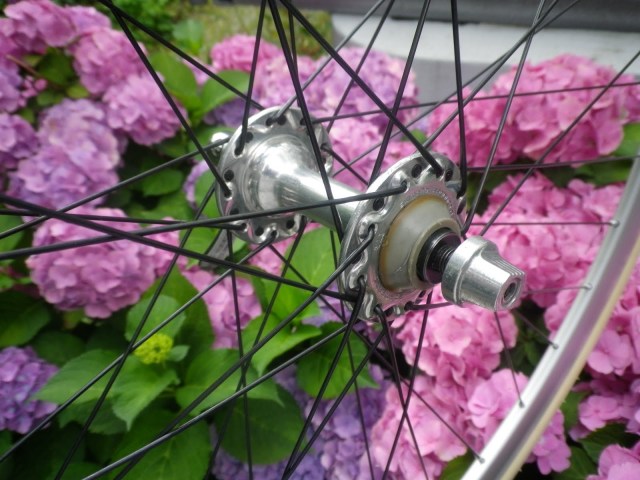 It such a nice past time to come home after work and built-up a wheel. In the office one has worked with paper on abstract processes but here the end result can be touched and looked at.


For the past three months I have worked on the built of a new wheel set for the Olmo frame. It took a while to acquire the right components and as usual I made some mistakes. During the last week I started to built the wheels after work. It is nice to sit in the evening on the balcony outside the kitchen with a glass of red wine and work patiently on the truing. It very much helps me to relax and after a wheel or so I am much nicer to my family. One glass of red wine although is enough.


Both wheels (the second set I did on my own) are now completed and I took some photos in front of the „Ajisai“ in our garden. In Japan „Ajisai“ are blooming during the rainy season., however in Bremen they tend to bloom between April and October what is equivalent to the rainy season here.

The hubs are Shimano 600 AX from the mid-Eighties, the time of the first aerodynamic cycling craze. In the next photo you can see that the flange of the hub is not flat but has little cut-outs to accommodate the spoke heads. 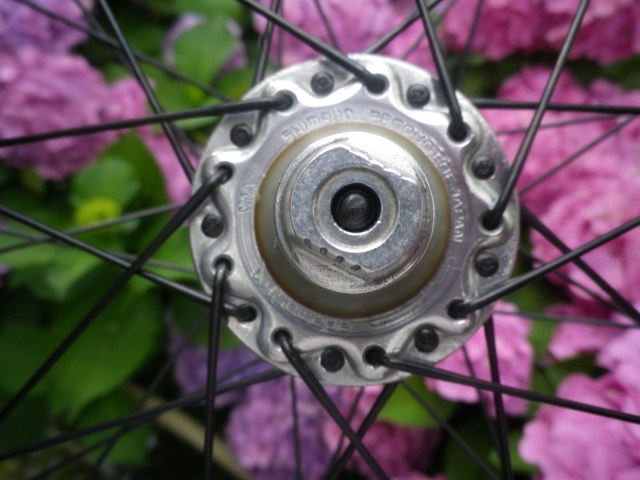 This has been designed to prevent the spokeheads from protruding from the flange, thus making the whole component more aerodynamic. It also defines which spokes run on the inside, and which on the outside of the flange.


The spokes are standard off the shelve Swiss revolution 2.0 mm spokes, with 1.5mm main section.


The rims are from new Rigida, type DP18 in silver with braking surface. Today the variety of new rims offered in the market is surprisingly low. There are a bunch of Mavic types, notably Open Pro, Open Sport, CPX22 and CPX33, some DT Swiss, some Rose and some Rigida but not much more. The same is true for spokes. Apart from DT Swiss and Sapim there isn’t much left in the market. Riders and OEM manufacturers today tend to buy System wheels which is a pity.


I included (invisible) standard blue Schwalbe rimtape, my favourite one due to the color, thickness and flexibility and Continental race tubes. Tires are again from Schwalbe, type Durano which is available in many colors and not that expensive. The valve caps are eloxy type which brings luck – my personal „o-mamori“.


The total cost for this is about 180 Euro, including the tires. This isn’t exactly cheap, one can easily get a Shimano system wheel set for the same amount of money. But the pride and the opportunity to fully customize the set makes it worthwhile. 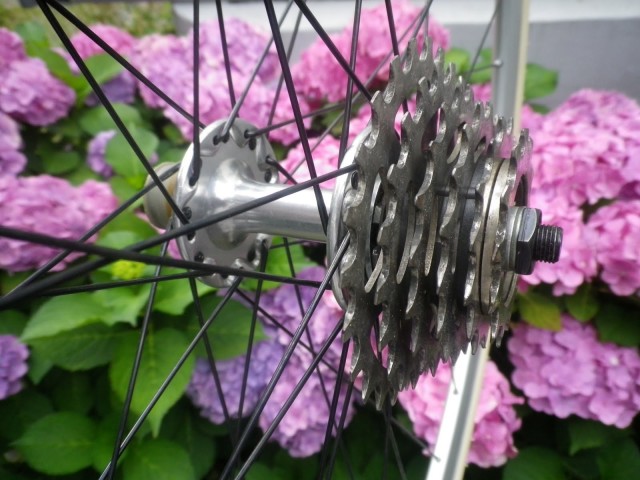 Here we see the 5-speed Uniglide cassette from Shimano. This used to be the predecessor of today’s Hyperglide system which is now widely adapted. The Uniglide was only popular for a short period when makers shifted from screwed cassettes to freewheel bodies.

Next week the Olmo frames will arrive at my house and I will work on the new bikes with the new wheelset. I hope they will be ready for riding next weekend. 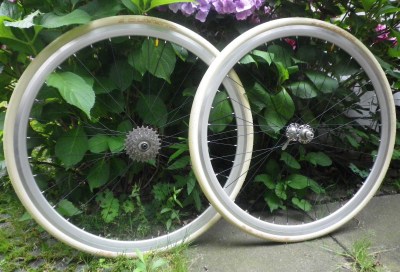 
We left HaW at 14:30 and headed out in direction Fischerhude, Wilstedt and Worpswede. The pace was brisk at the beginning; Shadowman and me were riding GA1, whereas Tobi was already moving up into GA7. The second stretch led us at much slower pace to Burg, the Lessumwehr and from there back along the river Wuemme to the HaW.


The high speed team chase between Wilstedt and Worpswede when the three of us rode almost us perfect as HTC Columbia for Mark Cavendish (or Positivo Espresso 2005 in Saiko).


The explosive acceleration of the three of us when a group of non-professional cyclists tried to hang on to us in the mountains (i.e. the bridge over the federal highway before the Platzhirsch). This led ultimately to a snapping chain of one of the amateurs, followed by balls hitting a saddle and cries of pain.


Tobi meeting his dream girl on a Bianchi between Worpswede and the river Wuemme. The Bianchi she rode was an older model. And she as well.


Shadowmen and me finding out that we do not only have very similar family names (the crow and the raven) but also the same profession: civil engineering. This led to long discussions about bid rigging strategies which slowed the pace down. Good for Tobi.

The Dutch girl at the reception of the hotel told David and me that the Giro D’Italia had a stage this year finishing at Ravenna.


Once home I checked the official site and Youtube to find a video about the stage with some landmarks we might recognize. It seems that David and me unwittingly rode a portion of stage 12 when we headed out for dinner from Ravenna to the Adriatic coast at Punta Marina. Cool. Somehow I noticed that special feel and magic of the road when riding there. I guess. 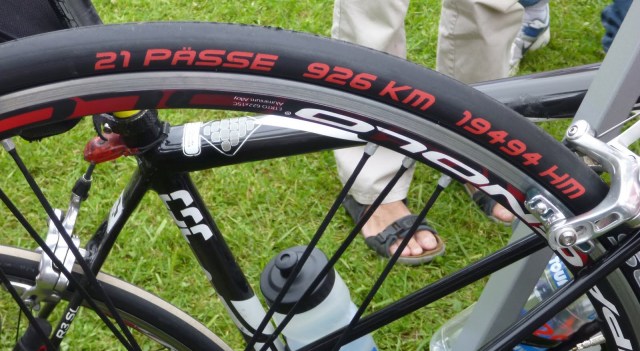 Fantastic ride from Thor Hushovd at the stage today. A very exciting TV moment in the office thanks to ZDF German televison live stream. 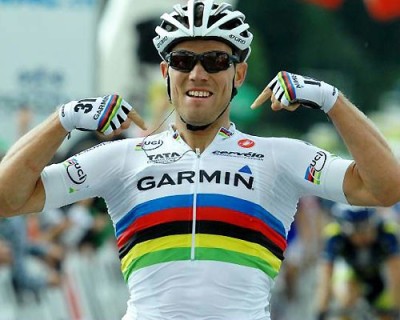 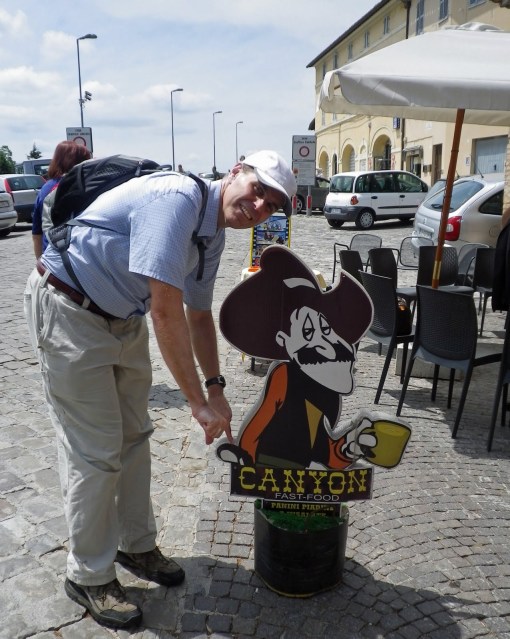 This photo captured the precise moment in Urbino on July 5th, when David considered seriously for the first time to purchase a Canyon frame. Although I cam very satisfied with my disguised Canyon bike, I think it is only fair and appropriate to ride Paris-Brest-Paris on the Cervelo bike that did all the qualification work for the event.
To use more reliable wheels than the Rolf Vector paired spoke ones might however an idea worthwhile to consider. 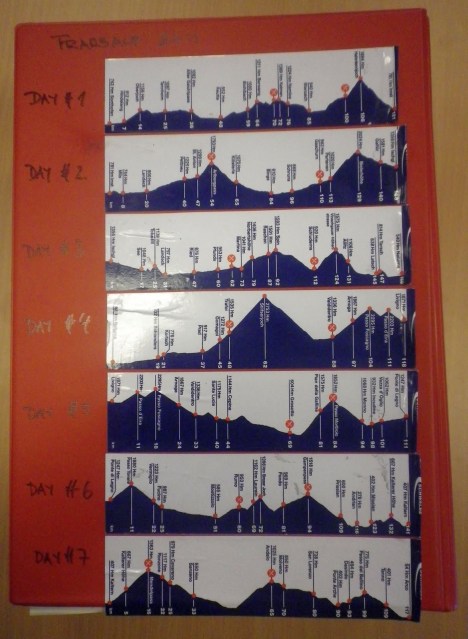 For each day of the Transalp we were provided by Schwalbe with this adhesive elevation profile strips which we would attach to our frames and which would guide us through the day. without them, I wouldn’t have made it.

Here are the official videos from the Transalp day by day. 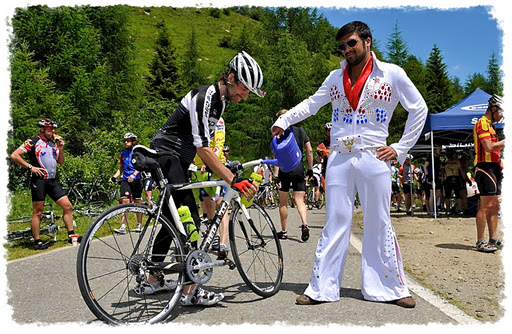 They had one cool song at the start of the race, something about „Jungle Jive“, anybody any idea?

I also will try to get us on the official link list of the Transalp home page. Many blogs are listed there, but most of them are too…. serious I think.