Early on Sunday morning Positivo Espresso assembled a large group of eight riders on the shores of the Tamagawa. At good speed we first cruised along the river, overtaking countless less competitive Japanese amateurs, the riding along Asakawa until we arrived at the 7-Eleven in front of Takao station, the Positivo Espresso approved refreshment stop.

Since a long time we stop there, nowadays it is not any longer question if we need food or drinks, like pavlov’s dog we are stopping there. No matter that there are combinis further down and further up the road en masse. This is our combini.
On the way we lost David and almost lost Alex who was able to arrive almost at the end of our break.

Ludwig and me felt good, so we went for a fast ride up Otarumi Toge. We wanted to draft each other up, however our plan failed already at the start point where Ludwig overtook a BMW on the right at the lights, while I stayed behind the car. I was not able to recover the gap which was then created and could see Ludwig speed ahead in front of me at the steeper parts of the climb.

I felt really good, but made only a disappointing 15:27 min up to the top, way below my best times. Ludwig did well. I was although not completely exhausted and I felt that I could have raced a little bit faster if I had really tried. For a winter TT the result wasn’t too bad.

We waited for the rest of the group on top of Otarumi. Ludwig tried to take a group photo with the camera resting on a stone on the other side of the road. With the help of our precise information, he was able to make some nice pictures of cars racing by.

Here he is positioning the camera.

And here he is asking for some additional information which were unfortunately not at all correct.

There was already some ice rain on top of Otarumi and we were wondering if we could continue. But as usual the weather on the other side of Otarumi is different than on the Tokyo side and once we were back in the lower reaches the situation was OK.

We continued towards Tsukui lake where we take a very nice road over a small hanging bridge and then along the North side on a very small scenic road. Just wonderful and incredible that we haven’t found this road earlier.

We then continued to ride towards the Hiroshi-Mitsubishi tank training range road, which we somehow missed and then along the Minami Tama One Kanbu towards the Tamagawa. This is a very nice and fast road indeed with many ups and downs. One could race there at a good pace and we were testing ourselves against two younger Japanese riders.

Unfortunately there was a group of apparently non-Japanese cyclists who drove through the occasional red traffic light. Mistakingly believing that Ludwig was the leader of that unidentified group, he was approached and reprimanded by the Nalsima cycling police. We others watched interested as he got approached, but didn’t felt much called upon and rather less inclined to join the discussion. In true local fashion, Ludwig took all the responsibility on himself even though he didn’t really feel any.

After going home I thought about what the guy said and I would like to give him some credit because his arguments were not along the lines „This-is- the-rule-in-Japan-you-know, an argument which one hears so unnecessarily often. These days „rule“ is also frequently replaced by „compliance“ which already has made inroad into general usage. Bad enough, there should be a law confining usage to business matters.

We parted at the Tamagawa river and I rode home through Yokohama where I arrived after 118 km in the saddle. It was a very pleasant and fast ride with a good group. Although we were at different performance levels we could stay together and have fun. I had plenty or opportunities to climb, draft, go fast downhill and make the occasional sprint, I guess this is also true for the other riders.

Could do this more often, it doesn’t need to be the weekend 180 km tour every weekend. 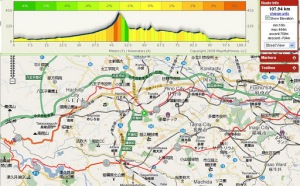 Columbus at the shores of Arakawa

The story goes that Columbus convinced the Portuguese queen that there must be a different route to travel to India than travelling to the the East. Ludwig convinced me, that there should be a different route riding to Ome than going to the West along the Tamagawa.
So one Friday morning we met at Hamamatsucho and started our discovery ride. First we travelled to Shin-Kiba (unfortunately not in true TCC fashion over the Rainbow bridge) and checked out the estuary of the Arakawa where we almost immediately discovered an island emerging from the sea.

Provided that you are living in Tokyo, the existence of this island is thanks to all your generous contributions in form of garbage which is disposed just after Yumenoshima in a new giant landfill (so far no Giant landfill product recall).

But there is also a nice park and one appreciates the fact that the sea is close.This is the right time to break a sec

So when I spoke to the hill-climbing bike population of Tokyo, I often heard the opinion expressed that Tokyo is a city in a valley, surrounded on all four sides by mountains, of which one the highest are to the South and impossible to climb.

All lies. It may come as a surprise to you but Japan is in fact an island, and even more surprisingly, surrounded by the sea. And this sea touches Tokyo in the South and is exactly where the Arakawa ends. Ludwig and me just discovered that on Friday.

So Ludwig and me „took a mental note“ (one of the most notorious quotes of my previous boss. It basically means: „Don’t bother me with that. I will forget once I have left the room.“) to tell our king about this magic island once we return to court. Then we fiddled our way around Shin-Kiba and arrived at the bicycle superhighway along the Arakawa.

Wow, this is something riders from the Tamagawa can only dream about. If Arakawa is route 246 at approximately Atsugi, the Tamagawa is a side street to Takeshita Dori in

and me went fast in a draftline for at least 20 km. We tried some race tactics, were frolicking around and trying to sprint away from each other after coming out of the draft. In no time we arrived in Kawagoe where we continued along the Iruma river.Here the cycling pathes are much narrower and there are some unpaved stretches.

I had a flat tire, and found out the hard way that my carbon cartridge valve is not properly sealed. By the way, later at home I tried to fix my tire with the Panaracer patch. This is very easy to apply as the patch itself is very thin and easy to glue on the tube. Does anybody else have experience with this patch, especially in terms of durability? Is this only something to finish the ride or can the repaired tube than used as it would be new?

The cycling path around Kawagoe was OK but not great. Finally we found our way on the road to Ome, where we crossed a very small part of Chichibu and then finally arrived at our beloved Aurore bakery in front of the station where we just by chance met Denis. Yes, we have done it, we found the East passage to Ome and were greeted by the aborigines.

Basically we had done one complete loop around Tokyo (185km from and to Ludwig’s house), something like a grand version of the Yamanote Challenge.

Unfortunately when I came back to the court at home rather late, the queen was not very amused by my brave endeavours which took slightly more time then envisaged, and sentenced me to two hours of math home works with my son.

After a cold morning ride (including a few minutes of stinging sleet falling in Hachioji and again on the West side of Otarumi Pass), what better way to enjoy a Sunday afternoon than to stop by Positivo and have Nagai-san install my new Quarq Cinqo powermeter. It works like a charm, immediately was „found“ by the Garmin 705 (ANT+ compatible) computer. Just rode it around the neighborhood, but so far, a great piece of technology. And for David J.’s benefit, I should mention that this means NO COMPACT CRANK for me during this winter/spring training. I’ll need to learn to ride again like a real man.