Another weekend, another Saturday ride … this time with a plan (achieved!) to return by the Noon hour.  Aurore bakery in Oume was closed, so we took that as an omen not to go into Nariki and approach the Holy Fountain or Yamabushi Pass.

Instead, we went via Ikusa-bata (Battleground), over the forest road climb to Umenoki Pass (approx 650M elevation) and Tsuru Tsuru onsen.  We took a slight detour to swing by Stephen and Ryoko Coady’s place near the bridge at Ikusa-bata.  Ryoko’s familiar bright red VW was parked outside and there were signs that the house is in active use (but it was early Sunday morning and no signs of activity stirring inside, so we moved on after a few minutes rest in the shade on their porch.)  Is Stephen still in Switzerland?  Back in Japan?  I’ve lost his cell number when my last phone died and was replaced, the data unrecoverable by normal measures.

At the top of Umenoki Pass, another in my series of photos of Jerome resting on concrete road surfaces: 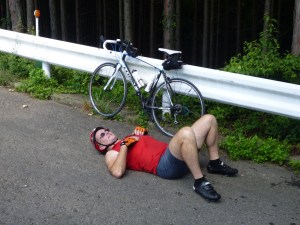 My Cervelo … still with the bulbous saddle bag from last weekend’s Brevet:

The onsen is 2.8 km from the top of the climb.  The lower stretch of this descent on the S. side of the ill, after passing the Onsen, was one of the most delightful roads I can remember within the Tokyo prefectural limits, a classic 2-4% grade along a river/stream with very little traffic and lots of green.  It must be spectacular in April/May.  The climb up the North side had nice variety, mostly shaded, some very steep stretches but none that lasted for long, almost entirely in the shade, and on a closed forest road with no traffic yet a decent road surface (for climbing, anyway).  I’ve known about this for several years, but never managed to try it until now. (The entrance is not obvious from Yoshino Kaido on the N. side — you would miss it if you did not know where you are going or have a good map.

This may help for anyone who wants to try it and does not know where the entrance is:
http://connect.garmin.com:80/activity/embed/48576767

A Brevet Too Hot

Jerome met me on Saturday the 4th at 6AM as planned and we drove out the Tomei Expressway and then through early morning traffic jams of trucks on Rte 16 to Sagamihara, finding the  god-forsaken, hot stretch of gravel along a riverbed where we could park for the Brevet. 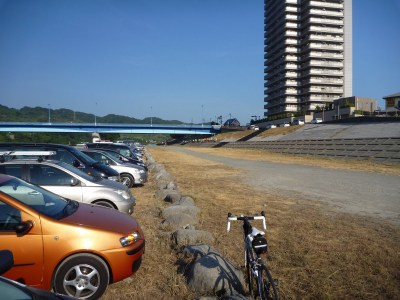 Jerome was on his smart looking new Look 565 — replacement for the stolen 2004 Look 585. As an „unofficial“ entrant, Jerome made a good showing — with reflective vest, lights, etc.

We suffered through the first leg to Itsukaichi, made a short stop, then suffered through the heat on the way up the lower Akigawa.  Jerome took a break for a plunge in the river before the climb to Kobu tunnel, while I pressed ahead slowly and waited for him at the tunnel exit.  After a quick trip to Uenohara, we took an unscheduled convenience store stop in a desperate attempt to cool down.  To no avail.  I made my slowest ever ride up Rte 20 to Otsuki and was fortunate to have Jerome go ahead and scout out a route through several farmers‘ fields and down to the Katsura-gawa, where we could get into a river pool by climbing down a rope.  Temporary relief.

After only 10 minutes on the bike again, I felt just as hot as before.  We stopped at another convenience store past Tsuru, … no shade and heavy traffic on the climb up Rte 139 to FujiYoshida.  Time passed and we saw fewer and fewer Brevet riders, as we slipped to the back of the pack.  Jerome waited for me several times and we finally limped into the Kawaguchiko rest stop at 3:05PM, just ahead of the 3:15 cutoff.  At least it was cooler there at 900 meters elevation and with a few clouds. 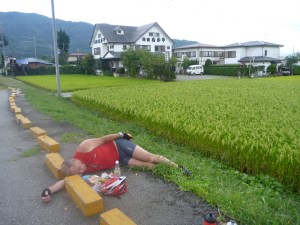 After a long rest (almost an hour), we pressed on in the cooler climate, partially recovered and rehydrated.  We persuaded one Japanese rider, Hiroyuki, not to „retire“ and to continue with us.  Once we climbed up to Saiko, and rejoined the main road, we made good time to Motosu-ko, which was beautiful, with a breeze for the windsurfers on the far side, and some haze and clouds mixed with blue sky.

We then had a nice, fast, long descent down to the Fujikawa at the base of the western side of Mt. Fuji.  …. where it was again HOT and HUMID, even as the sun set.

We slogged on with Jerome pulling me and Hiroyuki much of the next 50 km, into a light headwind in the dark.  At Fujinomiya, I said my farewells and boarded the train home.  The combination of heat, serious sleep deficit and lack of training over the past 4 months, having defeated me.  Lacking a „rinko bukuro“ („bike bag“), I used my windbreaker as a „modesty cover“ for my bicycle on the train, at least to shelter passengers from any chain grease — which seemed enough to keep the train staff from complaining on a quiet Saturday night.  I recovered enough on the train to ride home the 15km from Shin-Yokohama, and at last got a decent sleep at night.

Jerome made the long climb up to Fuji Skyline at night (spectacular, as I had expected and hoped to enjoy …), saying goodbye to Hiroyuki and another Japanese rider after waiting repeatedly for them on the lower stretches.   He enjoyed the descent into Gotemba and then slogged back down Rte 246 to Sagamihara, getting there at 4:30AM, 30 minutes after the cutoff, but when there were still 5-6 other cars awaiting returnees.