Cycling under the German Occupation 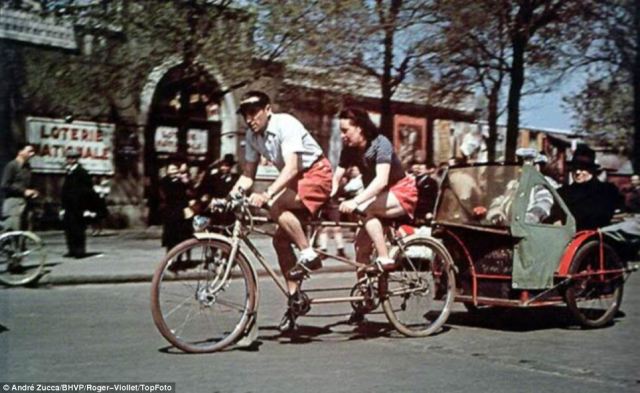 When I was researching our René Herse book, the most difficult part of the story were the war-time years. Herse started making bikes in 1940, while Paris was occupied by the Germans. Being conditioned by war movies and war-time memories from German relatives, I found it hard to imagine anybody making high-end bicycles during this time.

What I learned from the French cyclists who lived through those days is this: While everything changed with the German occupation, most things also remained the same. The German occupiers made the French pay for the costs of the occupation in foodstocks, so food was very scarce. Other things, like gasoline and rubber (bicycle tires), were almost impossible to obtain.

Despite all that, France no longer was at war. Life, at least on the surface, appeared more normal than in places like London and Berlin. Men and women went to work, sat in cafés, went to the movies, and even watched or participated in bike races. This did not make them collaborateurs. After all, it would have served little if all Parisians had sat in a corner and sulked for years while the Germans were occupying the city. Even the resistance fighters kept up appearances and tried to live as normal a life as possible, so they did not arouse the suspicion of the Gestapo or their French counterparts.

Even though relatively few French joined the resistance full-time, I was surprised by the many small acts of resistance. For example, I learned that René Herse actually had two shops. The first was the boutique with the showroom. Next door was the workshop where the bikes were assembled. There, the shutters were drawn and the building looked empty. Many of Herse’s employees were young people in hiding, often riders on his team who could not find employment elsewhere. They were evading the Service du Travail Obligatoire, which sent young Frenchmen to Germany to work in the factories there. This also explains why I could not find some of Herse’s employees in the company’s pay records – they were undeclared. Herse was not alone, many French did things large and small to work against the occupiers, even if, on the surface, they appeared to continue their normal life.

The color photos in this blog were taken by André Zucca for the German propaganda magazine Signal, which intended to show that life in Paris was continuing as before the occupation. Of course, life did not continue exactly as before – as Madame Porthault told me during one of the interviews for the book: “Even if we had a smile on our faces, that did not mean that we weren’t afraid deep down.”  Even though the photos were intended as propaganda, they show a glimpse of Paris during the occupation.

Gasoline was unavailable to private people in France during the war, so cars disappeared almost completely from circulation (above). Instead, bicycles became predominant in urban traffic. A nice bicycle not only was a means of transportation, but also a status symbol (below). 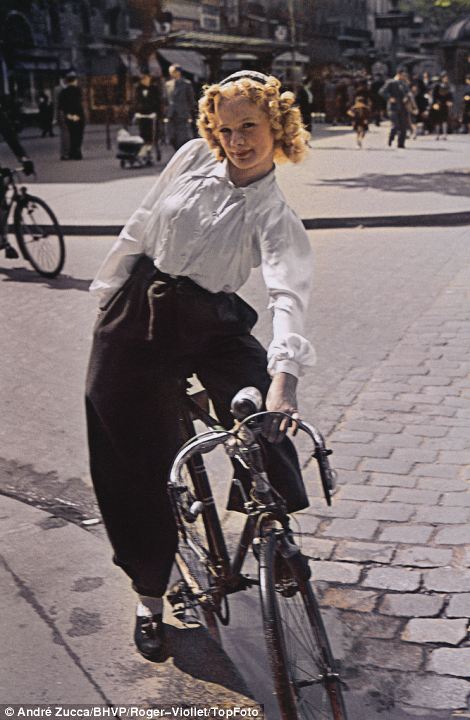 Many Parisians decried the implication of humans serving as beasts-of-burden (photo at the top of the post), but some bike racers actually enjoyed the job, since it provided excellent training. Lyli Herse’s later tandem partner, Robert Prestat, said that this was how he got in shape to race as a professional during the war.

This image shows a tandem taxi waiting for passengers. The tandem is a quality machine with a nice bend of the fork blades. It is equipped with Jeay “roller-cam” brakes and a rear drum brake, but the single-sided drivetrain indicates that it was not a top-of-the-line machine from one of the great constructeurs. 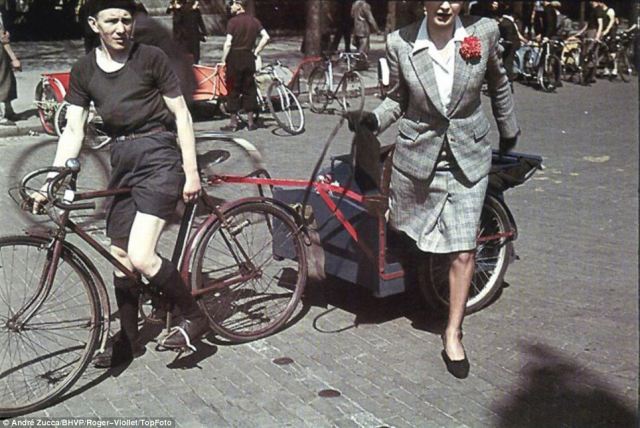 Here a fashionable lady exits a rudimentary trailer pulled by a basic machine with a “dog-leg” fork bend, ill-fitting fenders and a single speed. It appears to have a battery-powered taillight. Were batteries available during the occupation?

Here we have two taxis waiting in front of the famous Maxim’s restaurant. The tandem has a strange frame configuration. It is equipped with a short-chain drivetrain and both drum and cantilever brakes. Slowing the heavy trailer with two passengers must have taken a lot of braking power! The dark lens of the headlight was mandatory. It was part of the “blackout,” which outlawed any lights shining outside to prevent allied bombers from finding their targets. The other trailer is enclosed, which was nice if it rained but must have been claustrophobic inside, to say nothing of the extra weight the cyclist had to haul.

Fancy place like Maxim’s even had a covered bicycle parking area, which you can see on the left. Movie theaters advertised that they offered guarded bicycle parking to attract visitors. I suspect that Maxim’s had a guard, too, who may have provided the equivalent of valet parking for the well-heeled customers.

In 1943, there was a race of the tandem taxis (above a photo of the winners from the René Herse archives). The trailers were lightweight cargo trailers rather than the usual taxis. This tandem appears to be a top-of-the-line Hurtu with a twin-plate fork crown. It is equipped with Herse’s Speedy brakes. The triangulation of the frame is interesting, with a single tube running to the middle of each seat tube, and two tubes continuing from there.Madame Porthault identified the front rider, Tixidre. Click here for fascinating newsreel footage of this race.

What Zucca’s photos do not show is the hardship that Parisians suffered during the occupation. The most difficult aspect was finding food. One way to augment the rations was bartering with farmers who engaged in black-market trade. However, within easy cycling distance of Paris, there were too few farmers and too many people looking for food. Randonneurs had an advantage, as they could ride further in a day, and thus reach farmers who had food to trade. Madame Porthault told me how it was a race to return to Paris before the curfew, while avoiding checkpoints along the way. 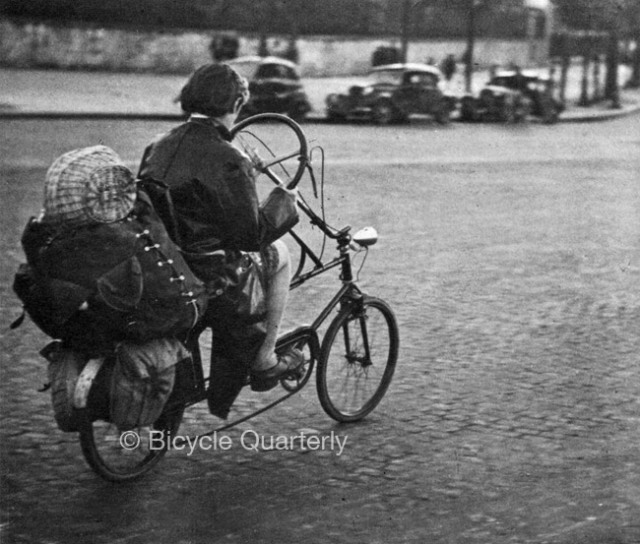 Every bike was pressed into service, even this pre-war Vélostable recumbent bicycle.

There are no photos of the tens of thousands of French Jews and others who perished in the concentration camps. These included many cyclotourists, and the list of the best-known dead in the first post-war issues of Le Cycliste was long. Most cyclotouring clubs collected money to send to the prisoners, or to support their families. During the occupation, the clubs became support networks, since they were people you knew well and could trust.

What was most striking to me, however, is the pronounced difference in the photos taken after the German occupation ended. The people are visibly more relaxed after the war, and the spontaneous smiles have returned to their faces. You often can tell whether a photo was taken during the occupation or afterward simply by looking at people’s facial expressions.

Life and cyclotouring in Paris may have continued during the occupation, but everybody was relieved when Paris was liberated. The photo above, from the René Herse book, was taken in 1945, just after the liberation. People’s clothes still are ill-fitting and speak of the privation of the occupation, but the smiles have returned. The tandem of Jean Feuillie and Lyli Herse no longer carries the license plate required by the German occupiers, which confirms the post-occupation date.

The mood is one of optimism and joy, which gave a huge boost to cyclotouring. People could travel again, and they could enjoy themselves without fear. Many were eager to take advantage of the re-found freedom, and the second half of the 1940s was a veritable golden age of cyclotouring. Understanding this history is key to understanding why the French constructeurs built such exceptional bicycles during the 1940s and 1950s. 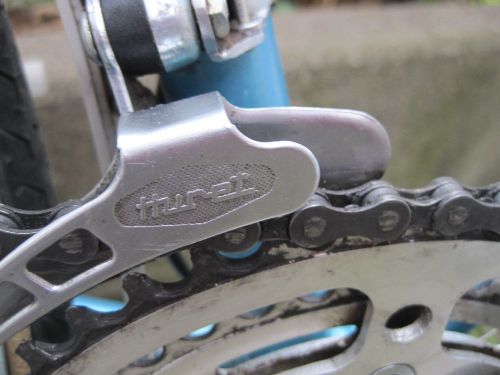 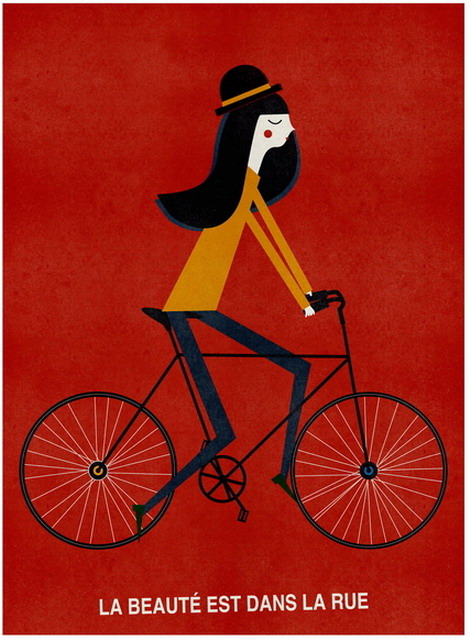