Area 51 is the garage next to our house where I work on „some“ bicycles from time to time. It is a highly classified area, protected by the home turf security act against female members of the family and it receives almost unlimited funding. Recent research at area 51 has led to the development of „Project Galibier“ and „Project X“.
It is although not the only classified area in or close to Bremen.

After getting the Cervelo ready for spring on Sunday, I took it out for a 100 km ride. I had eaten almost nothing when I jumped on the bike and I wanted to take it easy and ride in the 140 HRM bracket. It was a beautiful day, still cold, but definitely the feeling of spring was in the air. There were lots of people on the road at the river Wümme and the weather-harded Bremenites took the opportunity to eat and drink at makeshift tables outside of the rural cafes.

I opted again for Ritterhude and did the three climbs, each one for 20m. The carnival season has started in earnest; although the event is much less pronounced in the North of Germany. But still a lot of children dress-up and much glass is littering the roads and bike path.

I got lost in Osterholz-Scharmbek and suddenly found myself riding in Western direction towards Schwanende, Farge and the river Weser. I have never been before in that area, but it was nice and a little bit hilly. I finally arrived at „Area 52“ which is a military training complex close to Farge (you might recall that Farge indeed has a long militar history. This is where the submarine „Bunker Valentin“ was built.)

The road leads straight through the training ground. At one point there is a barrier where the traffic stops. But I asked some by passers and they told me that it is OK to ride through. So I did. There is a nice, wide road, completely free of traffic and people. One constantly has the feeling that a tank might break through the bush like a giant wild boar, or that a MG company might sit in hiding somewhere and watches, finger on the trigger. Later I realized that this is the closest I got so far to this feeling of exploring new and unknown territories when crossing barriers and gates of rindos in Japan. 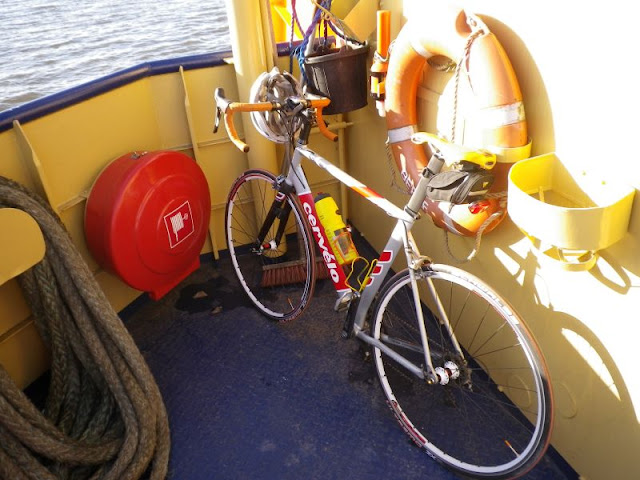 I arrived in Farge and was lucky that the ferry over the river Weser had just arrived. On the other (Western) side of the river, I continued to ride South. The roads are leading through old villages lined up in the shadow of the river protection walls. At Lemwerder exists the huge area of the Lürssen wharf. Yes, warships again, but also luxury yachts for Roman Abramowitsch, Larry Ellison and the other usual super rich of this world.

From there I entered Bremen again and rode home through the city. Of course I did the usual climbing exercise at the Kurfürstenstrasse pedestrian overpass.

I wasn’t fast, but including the time on the ferry it took me less than 4,5 hours for the whole 100 km and I stayed generally low in the HRM despite some tailwind. I will try to do more basic training to built up the fundament for longer rides later this year.

What I am lacking in terms of performance will be compensated by Project X. Hopefully.