I would like to thank David Jacob for providing this valuable piece of news to me this morning. I immediately discountinued any activity which I normally should do between 8.30 AM and whatever on weeksdays and hasten to update the blog. The purpose is of course to show to our wifes and families that although we spend a lot of time on our bike, we are not completely insane – like some Scottish guy [from the BBC news].

A man caught trying to have sex with his bicycle has been sentenced to three years on probation.

Robert Stewart, 51, admitted a sexually aggravated breach of the peace by conducting himself in a disorderly manner and simulating sex. 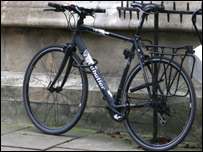 Sheriff Colin Miller also placed Stewart on the Sex Offenders Register for three years. Mr Stewart was caught in the act with his bicycle by cleaners in his bedroom at the Aberley House Hostel in Ayr.
Gail Davidson, prosecuting, told Ayr Sheriff Court: „They knocked on the door several times and there was no reply. „They used a master key to unlock the door and they then observed the accused wearing only a white t-shirt, naked from the waist down.
„The accused was holding the bike and moving his hips back and forth as if to simulate sex.
Both cleaners, who were „extremely shocked“, told the hostel manager who called police.

Sheriff Colin Miller told Stewart: „In almost four decades in the law I thought I had come across every perversion known to mankind, but this is a new one on me. I have never heard of a ‚cycle-sexualist‘.“

Stewart had denied the offence, claiming it was caused by a misunderstanding after he had too much to drink. The bachelor had been living in the hostel since October 2006 after moving from his council house in Girvan He now lives in Ayr.