Many Positivo Espresso riders and fans will remember past last August’s „Odarumi attack“ event, a two-day ride, with the first day involving a ridiculous series of climbs in blistering heat (Wada, Uenohara hills, Tawa, Tsuru, Imagawa and Yanagisawa Passes) with riders dropping like flies along the way (I turned back at the top of Wada and barely made it home, Michael K. turned back after Imagawa), a hot bath, plenty of food and a good night’s sleep at a ryokan in Enzan, and then the main event, a climb of Odarumi Pass (with an almost completely different group of riders, other than Tom).

Did I mention that Jerome and I are training for the Transalp Tour? With only two weeks left, my training is pretty much done, for better or worse, and at least I have boosted my mileage and climbing significantly this year, even if I am still carrying a heavier body up the hills than I would like.

In a break from the past, Jerome has decided to actually train for this event — I guess at age 42, it is no longer possible to just launch into a multi-day event or run a marathon with NO preparation. Jerome’s training consisted primarily of (1) our ride over Sasago Pass and Yanagisawa Pass 3 weeks ago, and (2) whatever he does this weekend. Next weekend we will be in recovery mode (cheese and wine included). So we needed one big ride, and he proposed a day of „Jumbo Mountain Training,“ at least as tough as the toughest day on Transalp, Stage 6. To head off an anticipated comment, let me note that „Jumbo“ refers to the size of the mountains, not the size of the riders!

We left home shortly after 4AM. I really, really could have used another hour or two of sleep, but agreed to the ridiculously early start, pulled in by Jerome’s enthusiasm — what are training partners for, if not to inspire one to train and brush aside excuses — to get up when it would be easier to just turn off the alarm, roll over and go back to sleep? … which, come to think of it, is exactly what Jerome had done. He awoke with his alarm at 3:30, despite having had a big office party with plenty to eat and drink, … but promptly went back to bed. My 4:10 call to his mobile remedied the situation. And his delayed start meant that I was able to ride at a very relaxed pace until he caught up to me at the Seven Eleven near Y’s about 20 km upriver.

We pressed on, taking the near-deserted roads, met Stephen Coady at 6:30 or so, just off of Yoshino-Kaido near the Ikusabata bridge over the Tamagawa, about 5~10 km west of Oume.

The long climb to Yanagisawa was uneventful, Tabayama-mura remarkable for the dense green of its hillsides at this time of year. The most frustrating part of this climb is the long stretch after Okutama-ko where, despite many little hills, almost no vertical progress is made. At 70 km into the ride, we had reached Okutama-ko and were at 530 meters elevation. At 90 km into the ride, we had attacked many little (30, 50, 75 meter elevation) hills, gone well up the river valley toward Yanagisawa Pass … and were at 658 km elevation. Every little hill seemed followed by an equal descent. These hills are not „rollers“. They turn upward suddenly, with an 8 or 10% (or 12%) grade for a short while. Jerome and I had suffered over these in the opposite direction, into a headwind, 3 weeks earlier.

Finally, the road turns upward for good, the gorge narrowing, the road passing through several tunnels, hugging a steep edge, and then switch-backing to get out the top of the gorge where it steepens (photo). Jerome had stayed back with Stephen at Okutama-ko, so I pushed on alone and was first to the top, with an excellent Touge Baka time of approximately 2:20 (approximate because I used a timer that paused when I stopped once for this photo and to scarf down a Winder gel, so I am assuming a 3 minute stop. I will list it at 2:22.12 on the Touge Baka records, just behind MOB’s presumably accurate 2:22.11). In any event, this was the easiest climb up Yanagisawa I’ve ever done, and I recommend trying this long, dry climb early, before the midday heat. 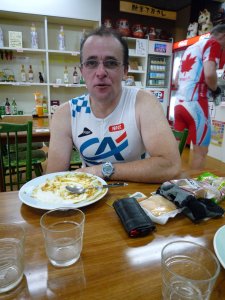 Jerome joined me at the top for a serving of curried rice, followed eventually by Stephen. I was still in need of that extra hour or two of sleep, and put my head on the table. Soon after Jerome rolled in, a special surprise guest stopped by — Tom S., having followed us (at his usual much faster pace) up to Yanagisawa. He still had many passes to go and was planning a route he could complete without taking the train home, also as usual, training for the Utsukushigahara hill climb. Nevertheless, he agreed to act as our guide to take us to the bottom of the climb to Odarumi Pass, as neither Jerome nor I had ever been there.

Stephen headed back for Oume, and Tom, Jerome and I descended to Enzan and the heat of the „Fruit Bowl“ area. Tom led us up another slope out of town, and pointed out two roads — the alternate routes up the first half of Odarumi. I chose the longer route and headed that way without waiting for debate, on the assumption it was less steep and based on Tom’s assurance that it had some cold drink vending machines, etc., whereas the other route did not. This approach offered several advantages for Jerome, most importantly that he could blame me for the miserable heat and lack of shade on the lower stretches, as well as the nasty steep stretch (14% grade warning on the sign) just after the route turned into a forest road around 800~900 meters elevation, while at the same time getting the advantages of a less steep climb in the beastly heat of the lower stretches, and benefiting from the kindness of the motherly old lady who gave us snacks, route advice and let us rest in the shade outside her store as we consumed cold drinks from the store’s vending machines. And of course, after we reached Yakeyama-Touge (burnt mountain pass!) and needed to DESCEND from 1535 to 1485 meters elevation to join the other route to the top, I had to admit the longer route did have that disadvantage, making us climb that 50 meters twice … at least I admitted it until I saw on the descent that the shorter route ALSO involved one area where there was a dip/descent of nearly the same length (at the dam/lake around ~1400/1500 meters.

In any event, Jerome suffered on the lower slopes of the forest road section, and again briefly near the top. I suffered on the upper stretches, saved by a nearly flat section of a few kilometers around 1700-1800 meters elevation and a 10 minute eyes shut rest on the grassy shoulder of the road near the end of that section. Thereafter, the road turned up for a steady climb of 7-9% grade the last 600 meters of elevation gain. The cicadas (crickets?) were deafening and small butterflies (moths?) were everywhere up to around 1500 meters (maybe it was the butterflies/moths chirping away that made all the noise?). Then the woods became much quieter.

Helpful signposts told us how far we had left, and let me calculate that we had an approximate 7% grade on the remaining section. The view from near the top was spectacular, as the mountains near the pass are a craggy, looming presence. The weather on top part of the climb was perfect — a cool breeze to refresh, but no need for extra clothing until we were ready for the descent. We each stepped off the paved road and over the border into Nagano Prefecture (for the Monday office talk „I rode to Nagano“ sounds better than „I rode to Yamanashi“).

The descent was … fun! Not overly technical, with an excellent road surface, plenty of curves, very little traffic (I counted only 4 cars coming up the hill at us over the first 15 kms of the descent). And by the time we got to Enzan station for the train home, we had ridden almost 200 km and climbed at least 3800~3900 meters, and were done with our jumbo mountain training. 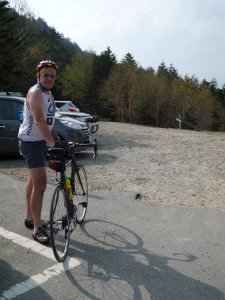