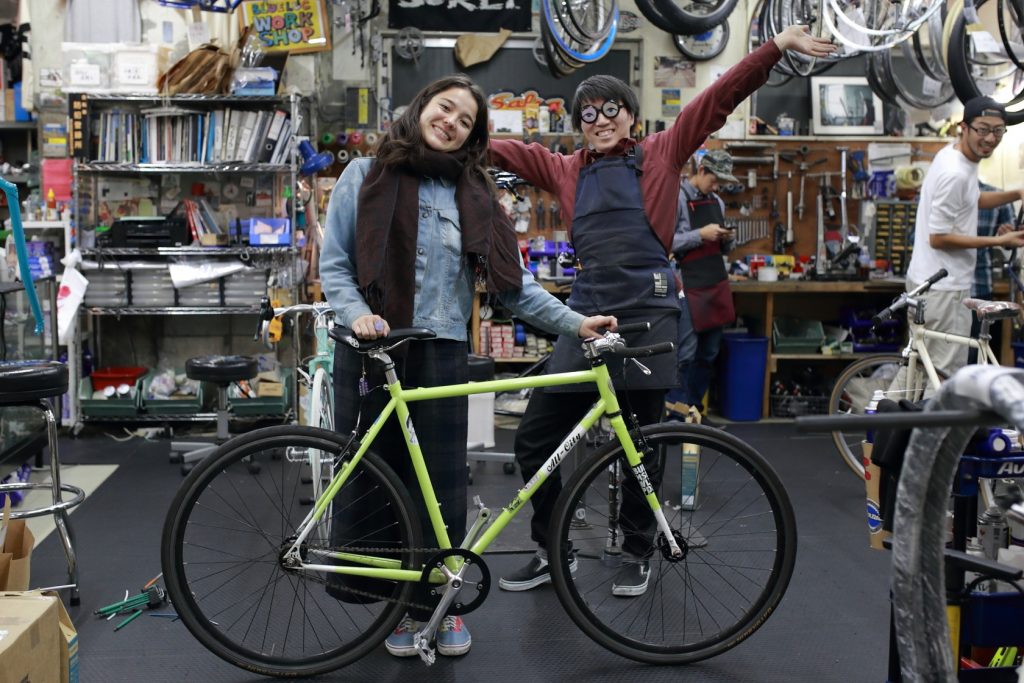 I’m gearing up to begin another wheelbuilding project, and that means locating more classic components. I recently wrote about a nice set of hubs I’ll be using: a pair of Campagnolo Record hubs with the HiLo rear hub — 32  front, 36  rear. Now I have my rims picked out: a set of vintage new-old-stock Mavic Monthlery Legere tubular rims. I should state right from the beginning that these are not intended to be wheels for everyday use, and certainly not for commuting, or anything other than special wheels for a special bike to be ridden on nice roads on the best of days. Nothing to do with necessity, and nothing „practical,“ other than the desire to build something really unique and something that I would have drooled over in my youth.

I’ve always had good experiences building with Mavic rims, so that was a prime consideration as I was making a selection. And since I had decided I want to use NOS vintage instead of current production, I had made the job of locating suitable rims a bit more difficult. The fact that I needed to find a 32 and a 36-hole rim didn’t help either.

In the ’70s and early ’80s, Mavic’s Monthlery rims were among the company’s best tubular rims — with a polished aluminum finish, and made with double eyelets at each spoke hole for extra durability. They came in a few different variations for different applications, and the prices varied accordingly.

At the lower end of the Monthlery line was the Monthlery Route. These were about 22 mm wide and advertised at 420 grams. According to the Mavic catalog from the mid-80s, the Route was meant for OEMs (original equipment), training, cyclocross, or for „difficult“ road conditions. That weight puts them into clincher rim territory, but they were probably bomb-proof when built into a wheel by a competent builder.

The Monthlery Pro was next, at 20 mm wide, and advertised as 395 grams (I believe 400 grams was probably typical in reality). These were a real mainstay rim for aftermarket wheels. Their weight was a little on the higher side for top-line racing wheels, but they were strong, reliable, and a good choice for a wide range of applications. If someone couldn’t afford separate wheels for training and racing, the Monthlery Pros were a really good way to go.

The Monthlery Legere („legere“ means „light“) was the same width as the Pro, but because of a slightly thinner-walled extrusion, they were advertised as being only 310 grams. Numerous sources claim the reality was somewhere between 330-340 grams. Mavic catalogs described them as „interesting for road racing. Excellent weight/resistance ratio.“ Obviously translated from French by someone with only a part-time experience with English. No doubt they meant something like „well-suited“ for road racing. But they did represent a good balance of strength and low weight.

The Legere was not the lightest thing going, however. There was another rim called the Extra Legere (advertised in a 1974 flyer as the Golden Monthlery) which was listed as weighing only 260 grams! I’ve seen sources that listed actual weight as somewhere between 270-280 grams. The Mavic Extra Legere, or Extra Light, would have competed directly with a couple of other rims of the day, the Super Champion Medaille d’Or (advertised 260 g), and the Fiamme Ergal Gold Label rims (advertised 280 g). I’ve never used the Fiamme Ergal rims, but there are numerous stories of them cracking or breaking at the spoke holes. In the latest issue of Bicycle Quarterly, Jan Heine actually describes them as having a tendency to shatter! I don’t know if that was hyperbole or not, but the cracking spoke holes was a common story. I have used the Super Champion Medaille d’Or – they were the first set of wheels I ever built, and despite my diminutive weight at the time (I was only 125 lbs at age 18) they needed constant truing. Was that because of my beginner-status as a wheelbuilder? Or because the rims were just too ridiculously light (probably a combination of the two) I don’t know, but at my age and current weight, I’m no longer so willing to sacrifice durability in order to shave a few extra grams.

Anyhow, I decided to go with the Legere for the reason that I wanted something light, but not stupid-light. I think they represent a good balance.

Now, looking for NOS vintage rims makes things a bit complicated. Searching eBay as well as online sellers who specialize in vintage bike parts, I found that availability seemed to be exactly in proportion to the weight of the rims. The OEM-level Monthlery Route is definitely the easiest to find. NOS examples seem to abound, with prices ranging from $80 – 130 per pair. The mid-level Pro is slightly less plentiful, but still available, and the going rate seems to be around $100 – 150 per pair for NOS. The Legere is pretty scarce. I had found a single 36-hole rim some time back for about $50, including shipping. It took a while before I could find a matching 32-hole for the front. Just out of curiosity, I’ve been searching for months for the 260 – 280 g. Extra Legere, and they simply don’t come up for sale. I’m not sure I’ve ever seen one.

This line of rims from Mavic did evolve over time. By the end of the ’70s, there were anodized versions available. The silver-anodized versions were labeled „Argent“ (which means silver) while gold-anodized were „Or“ (umm. . . gold) and the anodizing treatment was said to „improve the finished appearance and facilitate upkeep.“ In these anodized versions, the Legere model was re-named the Argent 10, and the Extra Legere was the Argent 7 (later Argent 8).

In the early ’80s, dark gray hard-anodizing became all the rage, and the 400 gram Monthlery Pro formed the basis for the GP4, a popular all-round racing and training tubular rim. I can’t find confirmation of it, but I’m pretty sure that the „G“ stood for „Gris“ (gray) in reference to the dark gray hard anodized finish, and „P“ was probably „Pro.“ My second-ever wheelbuilding project used GP4 rims, and while they were probably overkill for my still-flyweight physique (at the time), I literally used to ride those wheels down stairs and bunny-hop uneven railroad tracks on a regular basis. I replaced a few headsets, but never had to re-true the wheels. Not even once. The Legere became the GL330 (Gris Legere 330 grams?) and the Extra Legere would have become the GEL280 (Gris Extra Legere 280 grams?). The ’84 Mavic catalog claimed that the hard anodizing increased the surface hardness by a factor of 10, and that it increased the rigidity of the rim. I am not aware that the supposed increase in rigidity was in any way noticeable or if it made the rims last any longer, but in the ’80s it definitely became the must-have fashion. What I decided I didn’t like, however, was that after only a few rides, the gray finish would start to wear off the sidewalls – and it never wears off evenly. For that reason more than any other, I still have a preference for standard non-anodized aluminum for rims. If it gets scratched or dull over time, you can always bring back the lustre with a little bit of aluminum polish on a soft rag.

By the way, there was an older Mavic rim with a similar name, but was not part of the same lineup. Some readers may recall a model called the Montlery (note the lack of the „h“ in the spelling) Championnat du Monde which was a pretty common OEM rim in the early ’70s. Several sources state that they were original equipment on early ’70s Schwinn Paramounts, for example. These were a single-eyelet rim that had knurled sidewalls (remember those?) that were supposed to improve braking, but generally just made the rims howl like banshees when stopping.

My pair of NOS Monthlery Legere rims ended up setting me back about $115. Without a doubt, that’s a lot higher than what these rims sold for when new, but current model Mavic Open Pro tubular rims generally sell for between $70 – 80 each, so that puts it into some perspective. And at about 330 grams (or so) each, the weight is lower than most aluminum rims made today – and even on par with a lot of carbon fiber rims costing much, much more.

When built up, these should be just the right thing for a vintage bike restoration, and another example of Old Is Good.