The passing years have a way of turning a piece of cutting-edge expertise into balderdash—or proving it to be of lasting practicality. We tapped training manuals, books, and the words of respected experts throughout various eras to see how cyclists have addressed five enduring concerns. Here are the results.—Ian Dille

Best Way to Beat the Heat

1972
In days of blazing sun, the head should be further protected with a cabbage leaf placed under the cap.—Italian Central Sports School, C.O.N.I. Manual

Now
High-tech jerseys, shorts, and undershirts boost your body’s own thermoregulation while also reflecting sunlight instead of absorbing it. Pearl Izumi says its In-R-Cool apparel (made in part with carbon yarns) reduces surface body temperatures by 5 percent. But low-tech remains: Pro racers battle heat with ice-filled women’s hosiery stuffed down their backs.

1985
After gaining enough knowledge from cycling books, from coaches, and from your experience, you will become your own best coach.—Eddie B, Bicycle Road Racing

Now
GPS units and power meters allow cyclists to analyze training data at a level of detail and convenience that the most sophisticated labs couldn’t have ­managed in the previous millennium. Even so, you’re almost never your own best coach. An objective observer can spot dips in mood, signs of staleness, and other intangibles invisible to you and your computer.

How to Get Aerodynamic

1896
A most important reason for bending forward is to avoid the pressure of the air against the body, or in other words, decrease what yachtsmen call the “sail area.” To a person who has not raced it seems ridiculous to say that a stooping or upright position of the body makes considerable difference in the pace, but racing men will agree with me.—A.A. Zimmerman,Points for Cyclists With Training

Now
Even bikes that cost less than $2,000 come with aero frames, and wind-cheating­ helmets such as Specialized’s Evade and Giro’s Air Attack are becoming common on weekend shop rides. But the biggest, most basic improvement any rider can make is still to ride with your hands in the drops more often. (Next: Zip up that jersey.)

1895
You may smoke if you will on easy ground and will not find that it interferes with your riding—that is if your lungs are strong, and the exercise does not “wind” you.—Henry Clyde, Pleasure Cycling

Now
Many top nutrition experts advise cyclists of all levels to, above all, avoid processed energywhen possible, and instead to eat real foods in their simplest forms (even on the bike) and, when at the table, to make sure your plate is topped with multiple colors—green, red, yellow, orange, white, blue. And relax: Katie Armijo, a nutrition coach who works with pro cyclists, says indulging is important—and okay in moderation. (One cookie is okay, not the whole box.)

1945
Walk rapidly for about a half-mile but carrying the bicycle with your arm cocked so the bicycle’s cross bar is just off your shoulder. This tends to throw your shoulders back and stretches your chest and lungs, developing your grip, wrists, and arms.—Fred Kugler, Bicycling: Official Publication of the Amateur Bicycle League

Now
Nicole Christensen, owner of CrossFit Roots in Boulder, Colorado, which trains pros for brutal, all-day ­races, says that any cyclists without the full-body strength to deadlift their body weight for one rep will see a loss of power transfer to the pedals on long rides. Even a daily, 10-minute course of push-ups, planks, and light stretches will have you feeling better on the bike. 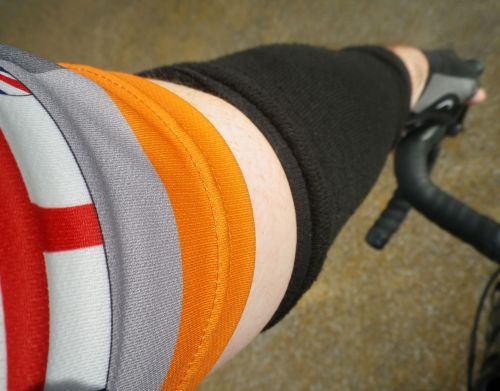 Ups, just noticed that this is the 1.000th post on this blog, so I better write something good.

Juliane, David and me travelled in late March to the island of Mallorca where we hold the traditional PEE spring training camp (since 2011). It is impossible to recount all the things we did there, but basically we slept, drank, ate and rode our bikes. Mainly the last one. We also hat a lot of good food. Within one week we rode 750 km and more than 10.000 elevation meters. We left the island one day before pure exhaustion would have prevented us to travel at all.

I had a lot of prejudices about Mallorca before arriving. In particular I thought that this is a part of Germany, where the elderly and the drunk terrorize the Aborigines. Wrong. This is a wonderful island with mountains, ocean, sun (MOS), perfect roads and friendly people. There were hundreds of cyclists out on the roads, mostly Germans, but also some Austrians, Swiss and Norwegians.

Most importantly, after Mallorca we felt much more confident about tackling the Transalp in summer.