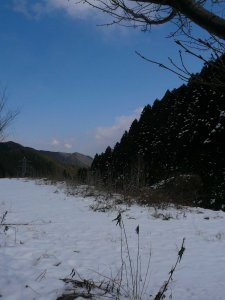 MOB and me joined the TCC for a ride. Pictures below – MOB’s report to follow.

We weren’t satisfied with the little bit of ice and snow we had encountered with everyone earlier on, so at Hinazuru Tunnel when everybody left turned back towards Tokyo, we continued on to explore what deep snow feels and looks – up Suzugane. We had a nice one-hour walk through the snow. Then zoomed at record speeds (35 to 55 km/h – thanks to a nice wind) to Uenohara. Train back home from there.

Nowadays Ludwig and me are sharing the workload of blogging after riding out together: Ludwig shoots the photos and I write the report around it. I think it would be even better if Ludwig rides out alone, so I could have even more time available to blog and wouldn’t be so exhausted.

Being born, choosing French or Latin as second foreign language in school, marrying, skiing with carving skis, buying a compact crank, going out riding with TCC, getting a divorce, committing suicide, ….. all of these are important milestones in life. And once we have completed them, we often ask ourselves: „Hey, why didn’t we do that earlier – that was great!“ [Perhaps, except for the last one in the list].

Ludwig and me decided to ride out with TCC on one cold morning in January recently and both of us were pretty sure that this would be as close to committing suicide as it would get. We had heard from Tom and read on the TCC blog a lot of things about the TCC riders and the rides they do: It is the stuff that Marvel Comics are made off – supernatural beings in hostile environments, flying up the slopes leaves nothing behind but the smell of burned rubber and other cyclist staring in awe. 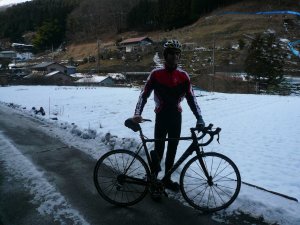 Also, if you read the TCC blog carefully, you will have noticed that comments such as „… where I took the wrong turn and couldn’t find the group any more“ or „where we finally lost LeeJ ….“ or „so we continued without them…“ are quite common. Wouldn’t we be lured into the snowy mountains just to be left behind and die?

Should we really dare to ride out with these guys? The team decided that their three ace riders, Tom, Ludwig and me should give it a try, as all the other aces were not available on that day and we were most easy expendable. I felt also increased personal pressure because as the JCRC D class champion 2008 I would become the target of a „Beat the Champion!“ competition on every hill. In addition, as some TCC riders are reading this blog, I would also be required to write something funny about it later.Hm, cannot do that possibly.

Strategically minded, I take the train in the morning to Hachioji and then ride the remaing 5 km to Takao station so that I am fresh and reasonably warmed up. I am too late, everybody is already waiting at the Family Mart! I stop, flash my smile and say „Hi, I am Michael, sorry to be late!“
About five Japanese rides stare at me in complete surprise and don’t know what to say. I look around and see Thomas shouting from the other side of the road: „Michael, we are here!“ Oops, that wasn’t a good start.

But everybody turns out to be very nice indeed, plus there are some more Cervelos so I feel almost at home.

In case you don’t know this: Takao station as more exits then Shinjuku station. Honestly. So the statement „Let’s meet at the exit of Takao station“ is about at the same level of precision as „Let’s meet at the nice Japanese restaurant in Shibuya“. Which then in turn led to significant delays before all eleven members of the ride were assembled and we could start the climb to Otarumi.

TCC riders are most impressively fast. Ludwig and me were already almost on the edge of our performance. We didn’t blame ourselves and our team completely but I was significantly slower and we were more sweating, while some of the TCC riders went up … chatting with each other. Hm. So we took a last photo of all of us together and Tom decided to head back to his Bruxelles sprout.

I heard wonders about the hill climbing skills of Alan, Deej, Philipp and Thomas, just to name a few, but these guys are also fast on the flat. Luckily the group was waiting at every junction for all riders to arrive before continue on this trip.

We took some new roads inside the route 20 / 139 / 413 magical triangle which we didn’t knew yet. To our complete surprise, despite the season and the hot tropical climate of Japan, some of the roads were completely covered with ice and we could only proceed walking. Who could have guessed that. 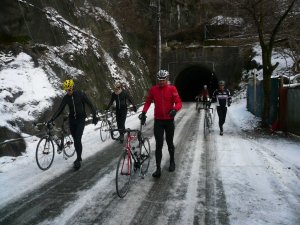 Subsequently, we had the first casualties, Naomi falling down on an icy part of the road and Alan having a flat tire. Everybody took it with grace. 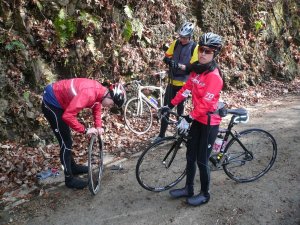 Another break. The Coke vending machines chokes 300 Yen but refuses to provide any drinks. Naomi complains with the owner of the shop behind it who immediately phones Coke headquarters in Atlanta. She get’s a written apology, her money back and a handful of nice hoshigaki which are distributed. 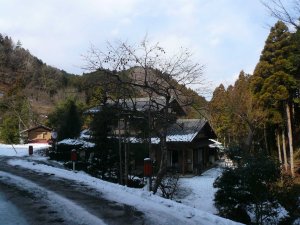 The self declared four „wimps“, who are actually enjoying riding a bike much more than walking beside it, decided to turn back when we reached finally safe grounds on route 35. I am sure that on this day they made more miles than anybody else of our group – a wise decision indeed. 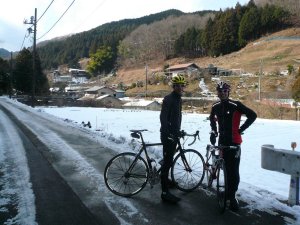 The remaining six riders then continued on road 35 towards Hinazuru tunnel. Ludwig is making the pace and Lee and me are trying to follow him. 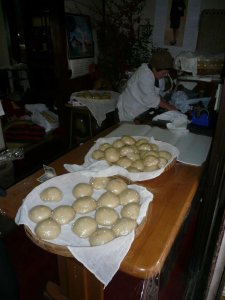 Unknown to the TCC riders Ludwig and me were steering the group towards the Manju shop because we have a lucrative contract with the owners and we are getting a fair share of the profit of every Manju sold through our introductions. They are really good I believe honestly nevertheless. Really, really good. Honestly. I think TBS or Fuji TV should dispatchgroup of talentos to this where they would be filmed eating manju and the women would look in surprise and say „Oiiishiiiii“ and the men would shout „Umai!!“, which is the proper Japanese way for talentos to state that something is good tasing. 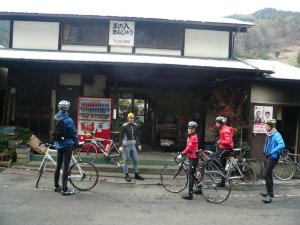 honestly nevertheless, they are gpod. And you can even choose between Anko and Miso taste. 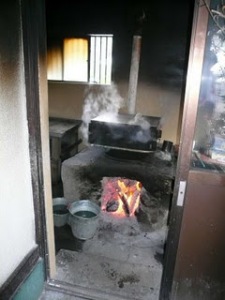 This is one of the traditional places where Positivo Espresso are required by tradition to stop and take a break.Everybody had a good time there and Naomi even decides to take some Manjus home. 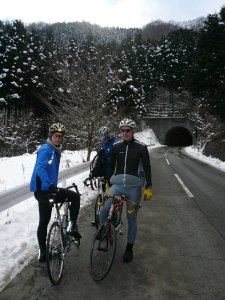 In the best tradition of Positivo Espresso the group decides to give up the plan to make the grande loop to Doshimichi and settle for the tunnel, than to turn back to Tokyo. Ludwig and me are still not satisfied with what we have done and we decide to continue and try to climb Suzugane pass. We say Goodbye to everybody else and continue through the tunnel, almost with tears in our eyes. 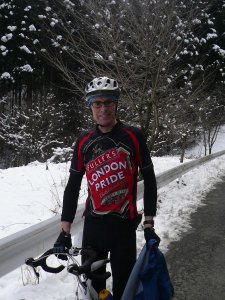 Everybody has been so nice and friendly, completely different from characters in marvel comics.

On the other side of the tunnel the road is still free of snow and ice. After some searching we find the entrance to the road to Suzugane. Up to the country club the road is free of ice, but then it is getting worse, I feel like on a skiing trip. 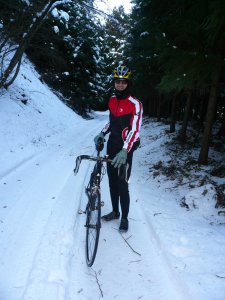 We ponder what to do …. after some serious discussion I can convince Ludwig to continue to go up. The road is now completely covered with snow. There is nobody there, no cars, no sounds, only the noise of cleats and shoecovers getting destroyed by walking on ice. 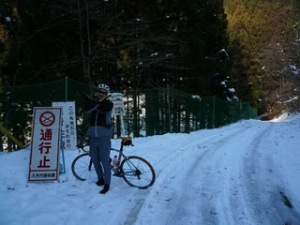 Finally we reach Suzugane Toge where a signboard prohibits traffic to continue further. Of course we do not let ourselves be affected by such blant and unreasonable statements and we start the descent in direction Sarubashi.

After a while the road becomes almost ice free and we continue to ride. I cannot clip into the pedals and need to remove a huge lump of ice and snow under my shoes.

But then we are back on route 20, where there is not much traffic and a nice tailwind so we are flying home in direction Tokyo. Yes, that’s fun, that’s bicycling riding … we should do this more often … why didn’t we do that in the first place, perhaps we should include „taking route 20“ in the above list?

So after a long ride of 92 km (for me) we arrive at Uenohara station and call it a day. There is really no reason not to ride out with TCC more often. As long as we can take them to the manju shop. 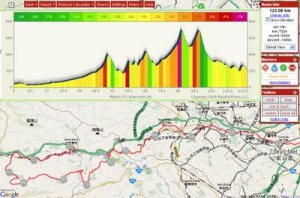