Then finally, it was time for the very last ride.

As James rightfully commented on his blog, there were quite a number of Sayonara rides during the last week. But having now finally arrived in Bremen, looking out of the office window on the grey sky and rainy weather, I can finally confirm that the last right was on last Saturday together with Ludwig.

As I was suppose to leave home for good on Sunday at 6 AM, Ludwig and me planned only half a day or riding on Saturday. We planned to ride out to Itsukaichi first, then climb Iriyama and Wada from the North side and try to set a new and final Togebaka record on Otarumi from the Sagamiko lake side before returning home. Needless to state that everything turned out completely different – as usual.

Ludwig did a long and gruelling ride the day before and therefore we met only late at 8 AM at Tamagawahara bridge. We were proceeding at medium speed along the Tamagawa and crossed over to Charles country road before we wanted to hit Mutsumibashi road to Itsukaichi.

Just when we climbed up the short hill leading from the river to the main road I heard a loud bang from the back of my bike and suddenly the handling started to feel strange. When we checked we found out quickly, that one of the spokes of my brand-new Shimano Ultegra rear wheel has broken and that another one was loose. This resulted in an extreme untrueness of the wheel which rubbed not only on the brake pads, but also on the cable stays. Impossible to ride and unfortunately the standard tool set didn’t provide anything to turn Shimano spokes so we couldn’t repair this somehow on our own.

I have to say that I am a little bit fed up with broken spokes. My Campagnolo Zonda back wheel gave me some troubles this year (three broken spokes) und I wanted to take countermeasures by buying the relatively cheap and reliable Shimano rear wheel everybody was talking about – only to become disappointed again. Perhaps it would be a good idea to let Nagai-san built a robust wheel for me just as he did for David ….. but then unfortunately they do not look as cool as a set of Zonda wheels.

Luckily we found a tyre shop close to the main road that provided as with a pipe – and a monkey wrench so we could at least adjust the wheel in such way as to make it „almost“ true again. The tyre team there was very nice and helpful. So please, if you need tyres (for your car, of course, not for the bike) in the future, please buy them there. For some reasons the guys over there hate Bridgestone and are huge fans of Dunlop and Continental. Schwalbe of course, they have never heard of. Great guys. 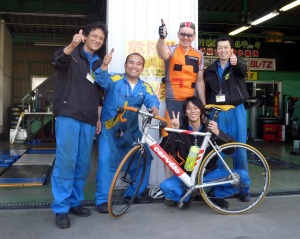 Despite all the trouble I felt great, almost like having my own pro team of mechanics and later Ludwig and me went to a Combini and bought some cans of beer for them.

I didn’t felt very comfortable with the rear wheel minus one spoke, so we decided to return to Y park on the Tamagawa and get the wheel fixed. When we arrived, the mechanic there told me that they didn’t have any spare spokes on stock for Shimano. No, they couldn’t true the wheel as well. No, they didn’t have any wheels to lend out. Quite desperately I took the stairs to the second level and asked for the cheapest rear wheel available to buy – Shimano R50 that is for about 7.000 to 8.000 Yen. With this I went down to the mechanic and asked them to exchange the cassette from the Ultegra wheel to the new one. So I was asked to write my name in a list and to wait until it is my turn. Couldn’t I be placed in the front of the list, as this was my last day in Japan? No, this wasn’t possible. So could I exchange the cassette by myself? No, also this wasn’t possible. OK, Sayonara Y.

So in the end after spending a great deal of time for nothing at Y (An experience that many Y customers are making as well, should I believe other blog entries), we decided to ride home to my house and get the Zonda rear wheel for exchange.

Here everything went smoothly expect that my wife was very happy that I have arrived back from the trip in time for some family activities and I needed to tell her that the ride has now finally started and that I won’t be back before 6 PM. That created some friction that were substantially bigger than the rubbing of my rear wheel on the cable stays. Wives cannot be kept in closets and exchanged when causing friction as in case of back wheels. We need to consider this when making decisions about one thing or another and we have to be careful not to mix things up. In this case however, and as this was now scheduled to be my very last ride in Japan for a longer time, the decison was quite clear. I excused myself and without wasting too much time Ludwig and me paced along the Tsurumigawa river on our way to Hashimoto.

And finally, afte getting almost lost one more time and crossing over some hills to Takao, we arrived at 3 PM and after having done more then 136 km at our traditional 7-Eleven in front of Takao Station. What is normally a two hour , 50 km ride from my home, turned into almost 8 hours of despair and friction. But we have made it.

We started at 25 km/hr all the way to the Family Mart where the TT starts and then we accelerated to 30 km/hr plus while I was staying closely behind Ludwig. „Hey – that is nice and easy“, I thought as we rode fast through the flatter parts of the approach. If this continues, I would have enough power to overtake Ludwig and sprint to the top. I thought foolheartily.
Because once the gradient started to become steeper (not steep, but steeper) and Ludwig was still going strongly, I could barely stay on his back wheel. At least I had the feeling that I was fast. About 11 to 12 minutes into the ride Ludwig pulled away and I was on my own. In the distance I could see the final corner, after which the overpass should have been. Looking at the watch I thought that I was doing well. I mean, if this is really the last curve because going up Otarumi there are two curves which look almost the same and I always mix them up.

„Hey, I am the god of speed …. ups …. that was not the final curve, I still need much more time to go“ is what I have been thinking many times at Otarumi. Perhaps one would erect a signboard on the second last curve „THIS IS NOT THE LAST ONE“ and another one at the last curve „STILL THINKING YOU WERE FAST?“.

This was the last one. One more push out of the saddle and I achieved a new personal best of 13:34 min. Ludwig was of course faster, as I can name at least ten more riders from TCC who can kill me easily on this hill, but please remember: I walked up this hill in 2004 when I tried it for the first time. I have come a longer way at an older age than most of you guys.

This was a very nice good-bye present from Ludwig that I will remember for a very long time.
We then took some final photos on the top. There seems to be a huge wolfhound beast lurking around at the Ramen shop which is always closed on the left side, but perhaps you need to understand Japanese and be afraid to encounter him. 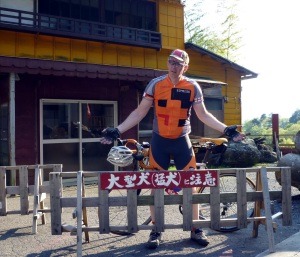 In order to shave off time, we rode down the same side in direction Takao station and I made it home before 6 PM so I could „true“ the relationship with my wife.

When Ludwig and me said good-bye to each other we had a final, typical conversation. Out of nostalgic considerations, I wanted to state some of the beautiful rides we did together and the high mountains we have climbed together for the first time as well. I thought of our ride up to Mitsumine Jinja and to Haccho Tunnel in Chichibu. But Ludwig wasn’t too impressed about these two rides. We thought long and hard which other passes over 1.000 m elevation we have climbed together for the first time and coundn’t come up with any. And we couldn’t agree on any single ride that was great, except for a vague feeling that we did something quite interesting sometimes in Chichibu…somewhere. So we parted. 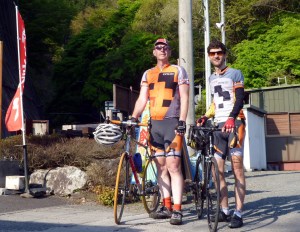 Meanwhile in Bremen: My Cervelo bike is with me and now ready to ride, but I didn’t had to time to do any junk miles yet. No wonder, grey skies, light rain and a temperature of 10 degrees almost all of the time. I better get used to that weather quickly or I will not ride at all.

I checked out the race events yesterday and much to my surprise there is a kind of brevet hold on Saturday for 210 km. I first laughed when I read the desciption of the route: „There are almost no elevation gains. The biggest challenges will be to cross railroad lines and highways.“
Then I stopped laughing when I noted that one has to do the 210 km in nine hours time. Not impossible, but surely not for the easy-going ones. I completely stopped to make any npoise when I checked the weather forecast for Saturday.

So I called the organizers: No. it isn’t a problem to register at the start on Saturday. Yes, the route will be marked and there will be supply stations. Yes, there will be even something warm to eat. They expect about 500 riders (for various distances between 60 and 210 km). Yes, I can pay 20 Euros (2.600 Yen) at the start.

This is great. No registration two weeks before the race, paying at the 7-eleven, than not starting because of bad weather. So I will wake up on Saturday morning, check the weather and .. not start AND not loose any money, great. Or perhaps I start. Will let you know later.

The other good thing is, that even in May the sun sets only after 9 PM, so there is still time for a short loop after work. Theoretically.

Chainring of the week 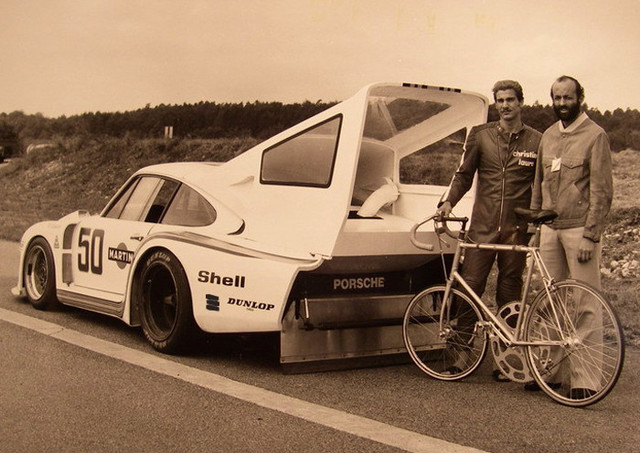 plus bonus quote (of last month)..

“I though, I’d better let this motorbike come by but when I turned around and looked it was Cancellara”