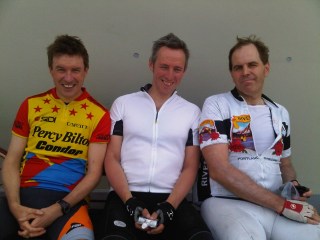 Today’s Sunday ride … was a bit too much for me.  Either I’m still recuperating from last weekend’s Brevet, or I’m not yet in my fighting shape, or the warm weather got to me, or most likely some combination of the three.

James M. had planned a 250 km ride out via Takao and Rte 20, over Matsuhime from the South and the back via Kazahari.  He wanted to go at his „training speed“ — I’m not sure what that is, but it is fast, and not really consistent with a social ride.

Michael H., Jerome and I joined James, Yair, Clay and Jules from TCC at Tamagawahara-bashi, Nishibe-san at Sekidobashi, and Fumiki and Steve (from TCC) at Takao.  The weather was gorgeous, even hot*, and the pace was fast out to Takao.

*As you can see from the photo, Jerome took full advantage of his exception from the P.E. Team Rule No. 9  today to wear his „short shorts“.

Jerome and I decided to head instead for Sasago, over Sasago Pass and then on to Kamihikawa and Yanagisawa — an even more ambitious a program (likely to meet Tom going the other way), if at a slower pace and with plenty of optionality for people to bail and take the train or an alternate route back.

Nishibe-san made it to Fujino, then said he would head back — via Wada, I think.  When I caught up with Yair and Michael H. at Uenohara, Yair was about to turn around and head back for Shinjuku, having done his work already as powerful domestique for the lead group.  Jerome and Steve were waiting at the far end of Uenohara and continued on with Michael H. and me for Sasago.  We did not see James M., Clay, Jules or Fumiki again — they presumably turned off at Sarubashi.  There was remarkably little traffic on Rte 20.  Perhaps the „my car“ drivers were already tired out from sitting in GW traffic jams and decided to stay home, while the trucks were off because it was Sunday?

I was a bit worried going through Uenohara — wondering if the Uenohara curse of near-misses, crashes and mechanical trouble that haunted Michael O.B. K. in recent years will get passed on now that he is in Germany.  Fortunately, no one had any problems today.

I fell behind Jerome, Steve and Michael H. on the climb after Uenohara to Yanagawa.  They waited at the entrance to Otsuki and asked if I wanted to stop.  „Yes,“ I called as I passed, „but at a convenience store.“

I went ahead in search of one.  I quickly passed a Daily Yamazaki on the wrong side of the street.  Then after a few minutes another Daily Yamazaki also on the wrong side of the street, at the crossing in front of the station.  Nothing for a few kilometers until, on the West side of town, a Lawson, also on the wrong side of the street.  No P.E. approved Seven Elevens on this stretch.  I left my bicycle out front so that the other 3 would see it when they passed.  The Lawson is not just any Lawson.  It has the best, most beautiful feature that is missing from 99% of the convenience stores in this part of Japan.  No, I don’t mean a „western style“ toilet.  I  mean a bench on which to sit and eat your food and drink your drink.  It seats almost 3 tired cyclists (the 4th must take photographs or sit on the ground), and is in the shade during the late morning.  Accordingly, we were happy to declare an exception to P.E. Team Rule No. 20 for this Lawson.

I had very good memories of climbing first Sasago then Kamihikawa one day last Spring, but it was not to be today.  I quickly fell behind the others on Route 20, and again on the old road climb to Sasago Pass.  By the time I arrived at the top, it was clear that today was not my day. Michael H. took a last photo of Jerome and Steve, in case it is needed for a search and rescue operation on Kamihikawa, and he and I headed back for Otsuki and the train home (he had a board meeting at his tennis club late afternoon).

The trip back to Otsuki was downhill and fast, despite a headwind.  We parted ways at Tachikawa and I rode another 23 km home, making it about 150 km for the day.  (If Jerome and Steve actually did Kamihikawa and Yanagisawa, and Jerome rode all the way home, he should be well over 250 km, which was James M.’s original target).  Jerome?  Steve?  James?

Up at 5:15am on Saturday, out with Humphrey to check weather conditions – lightweight jersey was decided upon, followed by breakfast (cereal, brown toast, banana & caffeine laden High 5 drink for me and a bowl of dry dog food with goat milk powder supplement for Humphrey). As this was a training ride for the approaching Tokyo-Itoigawa 300km race we wanted to get the distance in, hence the early start. For me this was to be the longest ride I have done yet. I realise that for Tom a 250km ride is an average weekend ride so perhaps when I am his age I can do the same. Off at 6am to meet James K out by David L’s house. On the way I enjoyed the site of youth around Ebisu station, namely drunks either propping each other up or strutting around in a last gasp attempt to pull a bird.
Lucky James and I are both male as we were merely amused that we both decided to wear pale blue Rapha jerseys that day. Had we been of the opposite sex we would either have had to have a fight involving scratching and hair-pulling (I would have been at a disadvantage here owing to James‘ ‚modern‘ hairstyle) or claim to be extremely embarrassed, storm home and swear never to talk to the other again. However, a Rapha aficionado will have recognised that these were jerseys from different years as one has a white stripe on one arm while the other has a white hoop on the chest.
On a gorgeous and windless morning we made fast progress along the river towards Ome. At one stage we came up behind a petite non-male rider who was clearly in great shape and moving fast. I felt no urgency to overtake as the path dipped down and made a U-turn and climbed back up to the main cycling path, but once back up on the main path the show was over as the aforementioned non-male rider was back in the saddle and I decided it was time to pass. Shockingly, the Aurore Bakery in Ome was not open when we arrived so we stocked up at 7-11. Before I had a chance to take a mournful photo of the Aurore shutters and send it to MOB to show how Japan is collapsing without him, men appeared from within to open the store.
We chose to ride long Yoshino–kaido for a change and it did seem to be more shaded than the main Ome–kaido. While riding along to Okutamako we saw several side roads that look worth exploring, but unusually, we stuck to the plan. I recognised one as Jerome’s road which leads up to the gates at the top of Kazahari but all others may have led to Shangri La or to even more remote places such as Bremen for all I know. The climb up Yanagizawa Pass (1,550m) was harder than I had anticipated but it was very scenic and we made our way up.

We kept getting passed by 2 younger and surely anorexic Japanese riders. One had a bell on his saddle bag similar to the ones elderly hikers use to warn bears in the vicinity so you could hear him coming. Not quite the same as what pro-cyclist Bernard Eisel had to endure: „I thought, I’d better let this motorbike come by but when I turned around and looked it was Cancellara.“ They must have kept stopping ahead of us, hiding in the shadows for us to pass only to accelerate past us again just to taunt us. The pale blue Rapha clad duo with a combined age of almost 90 were not to be broken.
The 1,050m descent down to Enzan is stunningly beautiful. 16km of fast roads which are in good condition thanks no doubt to a powerful local politician. We turned onto Rte 20, known in the area as The Fruit Line, and into a headwind and some unexpected rollers. A quick refueling at a 7-11 was followed by a scary ride through a busy 3km tunnel. The tunnel was at the top off a steepish approach so I was in my small chainring. Earlier in the day my chain had come off while shifting back into the large chainring so although the tunnel flattened out and was fast I was too scared to risk shifting for fear of losing the chain again. The tunnel had no stopping lane on the left. The result was that as fast as I pedaled I was unable to fully engage the perfectly sculpted calf muscles to which Mr. Knott often refers. A fast and uneventful ride along Rte 20 and after some mind games to see who would blink first we agreed to skirt around Takao rather than go over the top.
Discoveries:
256km, 2500m climbing, 10hrs 31mins in the saddle without a sore backside (thanks again Rapha).
Signing off……