The morning after another day with heavy snowfall in the Bremen flatlands.

On Monday the sky was blue and the roads were dry so I took my Cervelo out of the garage for a 80 km standard spin. I made it just up to Worpswede, about one hour, when it started to snow again. There must have been some very well blue-camouflaged snow clouds somewhere up there. I had to ride about 25 km back to Bremen against the snow and the roads were slowly becoming white. The snow was rather dry and while there wasn’t sufficient quantity accumulated on the surface, it formed in small hurricane patterns. When I came home it was snowing heavily and when I left for work an hour later on the Gazelle, I was hardly able to steer through the snow. 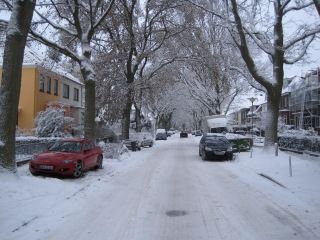 I rode to work early in the morning the next day on the Gazelle through the snow. It is a little bit tricky to ride on a racing bike with 700 x 23C tires as every little bump below the snow forces a sudden and unexpected change of direction. I thought it as a good exercise to learn how to control a slippery bike. I was probably just thinking that and how great I was handling the steering already and how fast I could go, when I came to a crossing where I had to brake a little bit harder. I did it too hard, so that the rear wheel went to the right and me down hard on the road.

After that I thought what a bloody stupid prick I am. I am not 26 any more when I rode home in the rain on my Motebecane on a bicycle lane than was separated from the pedestrian walk by a line of randomly spaced bollards and I crashed directly with my right knee into one without seeing it. That hurted very much but I survived, nothing was broken and there were no consequences at all. Now I am 48 and every time I fall it takes weeks until all of the pain is gone and I really should consider this when making cycling decisions.

So after spending a day in the office, trying not to move at all and after another night at home, trying not to move as well, I went into the garage and refitted the Bad Boy with the winter Schwalbe tires (700 x 30C). I was reluctant to use Bad Boy in the winter, first it is very messy to clean the bike, second the paint is very sensible to scratches (strange spec for a MTB or urban hybrid) and third it has no mud guards. And forth, the last time I crashed really hard was riding down from Yabistu Toge to Hadano on Bad Boy with winter tires.

But winter in Bremen leaves me no other choices than to ride on fat tires:  The Bad Boy was placed just behind the Cervelo and the Gazelle and the electric shopping bike of my wife and the new green Giant of my son and the Peugeot Galibier frame I am working on. Which stands in front of the old Pinarello frame which I am polishing and the beautiful Peugeot I have bought recently for fun and just leaves enough space for this super cheap Pesacarola racing bike I incidentally bought and the beautiful Gianni Motta I could not resist to buy. If performance really depends on the number of newly acquired bikes, I should be ready for Paris – Roubaix.

In other words, I took me some time to get the bike out, mount a saddle, pedals, tires, saddle bag, speedmeterand lights, which took another half an hour. All of this for 15 minutes of riding to work.

After having done the commute now three times I have to say that it is actually much more fun than on a racing bike. It is also stimulating not to been overtaken by grandmothers on their sturdy Holland-bikes while trying to stay upright on the Gazelle.

On the weekend I will utilize my newly rediscovered cycling courage to ride through the white planes on the Bad Boy. 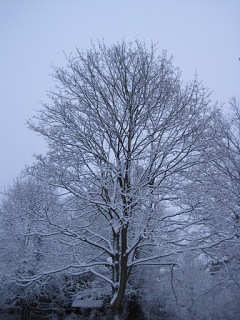 And after coming home an having enjoyed a cup of hot instant coffee, I will go to work on the Peugeot Galibier frame. I am still waiting for parts to arrive at my home and I am excited how some of the purchases, like the charge saddle, the Maillard 700 high flange hubs will look like. Although I have to admit that assembly of a bike is a tricky business, even if one has most of the tools. I wasn’t able to remove the crankset covers from the Pinarello frame and had to ask for assistance at a bike shop. I am also not able to mount the Shimano 600 rear tube shifters properly. And it was an absolute nightmare to fiddle white handle bar tape around a bullhorn handle bar. Well, this must be the fate of the Euro-cyclist, I guess.

I will post some pictures once the wheels have been mounted.
Meanwhile have fun in the snow, if you have snow.