Take my breath away 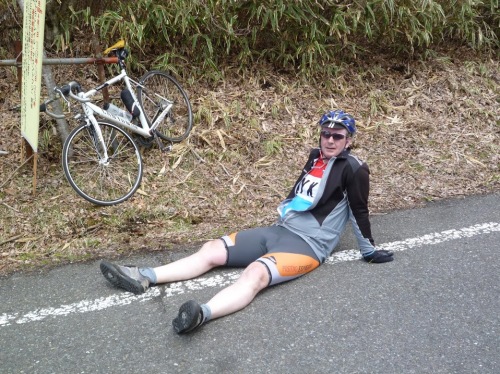 After staying in Ludwig’s house on a Tuesday night, some time ago in Japan, he took me on a bike trip the next day.

Ludwig was so kind to let me stay at his brand-new home close to Higashi-Matsubara for some days. The house is so clean and kept that way by Ludwig that it could well function as a semiconductor production site of a theatre for neurosurgical operations. As a father of two children in the midst, respective the beginning of puberty; and as a husband of a Japanese wife with advanced shoppitis and “let’s-stuff-it-away-we-can-use-this-later” syndrome the circumstances at our house are quite different.

We left relatively early in the morning through the decontamination chamber and rode to Shimokitazawa to beat the early morning rush hour. From there we took the Odakyu Line train to Shin-Matsuda from where we started our ride. Ashigara is not an easy climb, it takes one up to 700m elevation and some of the ramps are quite steep. I wore my Assos early winter jacket, Ludwig opted for short sleeve jersey. I was sweating at the top, Ludwig not. Despite all the effort, the climb is quite beautiful and offers nice views. Despite its steepness it is provided also a good and relaxed opportunity to speak about this and that.

From the top we took the smaller of two roads down into the neighboring valley, I guess it was prefectural road 78 which led as through a chilly forest on a rather poorly paved road. I was very cautiously descending as there was a lot of wet bio-debris on the road, I was riding somebody else’s bike (David’s Canyon) and it was still my body riding down. Nevertheless it was a good time, Ludwig was freezing obviously. We took a break to refill and warm up at the approved Family Mart Conbini in Ashigara. I had been there before, I remembered, with Ludwig and Jerome in November 2009. It is the last refreshing point before tackling Mikuni Toge. There many passes in Japan called Mikuni Toge, at least three come to my mind, so it is quite confusing to speak about that particular one. This is the one that commands a lot of respect among cyclist as it offers some spectacular steep ramps.

Ludwig warmed up on the following climb, while I began to sweat again. To climb Mikuni is really hard and it literally takes one’s breath away. Some of the ramps are 16% plus steep AND rather longish, so I saved myself by crisscrossing my way up on the road.

Luckily the traffic was very weak on a normal workday, a few cars, a few motor cycles and a dog, perhaps got lost or abandoned met us on the way up. When we reached the pass at elevation 1.100m there was still snow left in the shady corners along the flanks of the hills.

It took as almost one hour, way off our best times some years ago.

We met some a nice lady at the mount Fuji viewing spot on the descent to Yamanaka lake, took some photos and headed for the approved 7 Eleven close to the T-junction leading to the Doshi Michi. 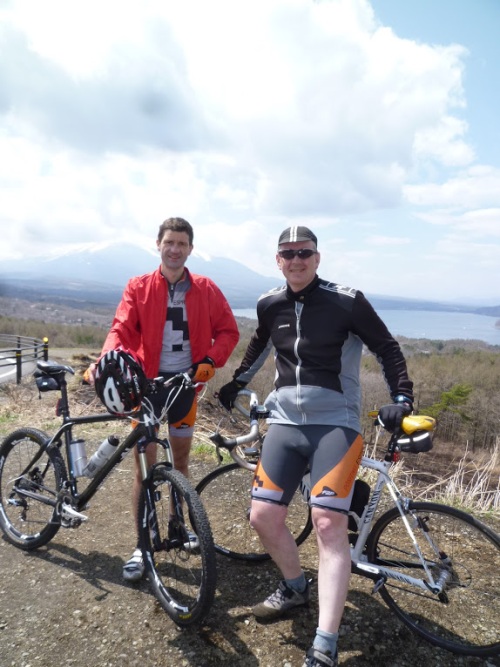 There we me a very interesting guy, Naoya X, a professional MTB rider on the Japan XC circuit with his friend on a standard mountain bike. Naoya rides a Canyon MTB that is sponsored by the company and he was quite surprised to see my on a Canyon as well, as the brand isn’t as popular in Japan as in Germany.  That might change in the future, the canyon homepage is available in Japanese now among other language and it might makes sense for the company to invest into developing this new and growing market.

A Canyon MTB in Japan

Naoya and his friend: The same MTB / road racer combination as Ludwig and me

Yep, we could have now opted for Nijumagari Toge, one of the most beautiful roads in Japan according to cyclist specialist Ito Yumi, but that would have lead us to Tsuru and the only options to go home from there would have been Road 20 (boring, crowded) or the Akigawa valley where I have just ridden with David a few days ago. So:

Another climb up to the tunnel, marking the highest point on the Doshi Michi road. Then bombing down the road towards Tokyo. By now I had grown accustom to David’s bike, felt very secure going high speeds and I really love the gentle slopes of the Doshi Michi that gives you the chance to ride 50 km/hr plus on a curvy road almost all of the time. When I slowed down for freezing Ludwig another guy overtook me, so we hunted each other down the road. After all the climbing that was real fun. Yes, I really loved the Doshi Michi at this point.

After that we made our way through partly urban landscape but missed the opportunity to ride along the North side of the Tsukui lake and take a look at the house of the local drug baron and its parked Landrover.  The new stretch of the highway passing through Hashimoto is now almost ready so the impression of a boring, urban sprawl intensified. Ludwig wanted to return from Hashimoto Station originally, but I could convince him that we ride home along the tank road and One Kan. My memory served me from point to point; I recognized the entry to the tank road, the exit to the One Kan and some other important points along the way home but I couldn’t necessarily draw a line between them.

We made a last stop at the (PE approved) Starbucks  at the end of the One Kan, then road quickly home to the Tamagawa river and later along the banks of the river to Futago Tamagawa and Ludwigs home. That was a very nice ride and for the time being the last longer one in Japan. I hope that I can repeat these kind of rides in the near future. My thanks go to Ludwig.