What could be simpler than a bicycle crank? It’s hard to imagine a simpler, more efficient mechanism for transferring leg motion into circular motion into forward motion. But almost since the beginning of bicycles, people have been convinced there’s a better way to propel a bicycle. Riders can only apply power on the downstroke, and some see that as a waste of energy. Since the earliest days of the bicycle, tinkerers and inventors have come up with all kinds of ideas to increase power, minimize effort, and eliminate „dead spots“ in pedaling motion – some that defy logic and physics, others that are bizarrely complex.

Now there’s another entry in the crazy cranks lineup that might actually be something no one has ever seen before – the Cyfly drive system. This thing is probably hands-down the most complex crank unit I’ve seen. Combining a special gearbox, a pair of multi-link crank arms, and an elliptical (almost rectangular) chainring, the Cyfly mechanism causes the crank arm length to change dramatically throughout the pedaling motion. The company boasts 33% more torque at the same pedaling effort.

If you’re thinking that such an unusual new crank design would be interesting to try, allow me to mention that the Cyfly is not something a person can just install onto their existing bike. The system’s oversized gearbox, which is needed to keep the crankarms chugging in proper synchronization, requires a specially-built frame.

One thing that doesn’t get mentioned anywhere is the width of such an unusual crank. There are no measurements given anywhere, but just from the look of it, with its extra linkages and everything, I’d say it’s a safe bet that this thing would make a person pedal like a duck – putting the „Quack“ in „Q-factor.“

The system also adds a good bit of weight, too. The version shown above is listed at about 2kg (a little over 4 lbs!). I guess that’s a big improvement over the earlier prototypes, though, because I read in BikeRumorthat the first version weighed nearly 15 pounds!

I know that there are lots of claims about the advantages of such a crank, but as usual, I’m skeptical. Whether it actually works as claimed or not, I wonder if the difference is worth all the added complexity — something this crazy crank has in spades.

Never heard of Bartime, King Kong or Hubsmith? These are the gems we sometimes find roaming the halls of Eurobike. All three are Asian brands, and all three had something interesting to show.

Above, Bartime’s oversized driveside flanges came in two flavors, both using starfish like protrusions to improve the bracing angle and even out spoke tension in the wheel builds. The freewheel body has an aluminum option with steel strips on most cassette splines. Inside, it had more teeth than a giant shark, and connecting it to the hub were carbon fiber bladed spokes…

Is that enough points of engagement for you?

This one shows the other flange shape, which allows for straight pull spokes rather than J-bend. The spokes’ nub slots into the socket on the flange, which has a massive 80mm diameter on the drive side. Steel ends are bonded into a carbon fiber blade that yields a 300kg tension limit.

King Kong, not to be confused with Tune’s individual King and Kong front and rear hub combo, had this new K.K. Rival hub on display. The basics are somewhat standard -alloy shell, various flange styles, road and mountain bike (even BMX)- but the internal pawl mechanism was unique. Three distinct rows of pawls were offset into pairs inside a very wide ring of teeth. This put just two pawls at a time in contact with the teeth for a secure hold. The dual locations meant more effective engagement points, but reduced drag versus all three rows having pawls at each point.

Look closely at this one from Hubsmith…see anything unusual?

Called Fusion Spokes, it’s a combination of straight pull and J-bend spokes on the same hub. The idea is to offer the benefits of both, yielding a wheel with good lateral stiffness and a comfortable ride.

They’re laced to carbon rims that use a Double Forming construction process that marries high Tg resin with a Nano-Elastomer resin system. They say the combination allows the braking surface to reach 250ºC (482ºF) with no deformation or risk of delamination. That should give you the confidence to brake hard and long on extended descents.

They also had this heavily machined hub concept with straight pull flanges and a carbon shell. 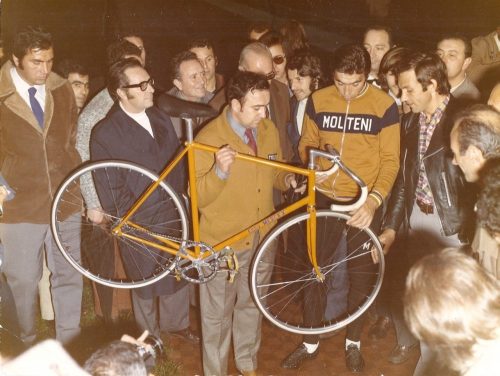 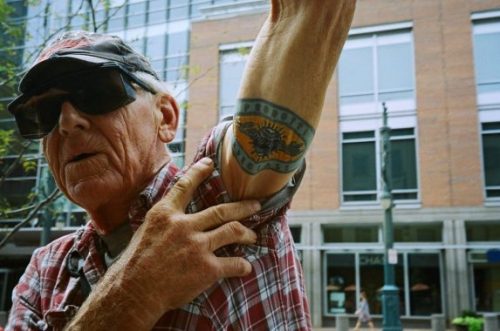