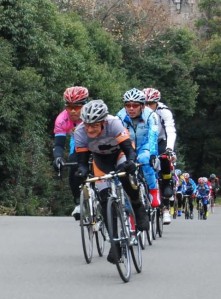 More to come. First a bath and some food.

All results are here:

Some of my younger colleagues are taking this bicycle commuting into the office, well, into the office.  I’m told it is forbidden by the producer/director/actors to watch this without speakers on, since the music is integral to their art.

Ice skating and Chris Horner interviewed, for your viewing pleasure.

Having ridden a couple of times to Kamakura on the coast via Route 1 from Gotanda and not particularly enjoyed the route, I was excited to see Tom’s ride from last week – Kitakamakura Enoshima Loop.

Enoshima, always wanted to try that and Tom‚ll know a good out of the traffic route.

With Garmin Connect far easier to use these days and the ride sitting there staring me in the face, I thought, ‚I’ll download that, ride out to where we it crosses the river and start the navigation function on my Garmin 705 and simply follow it“ Easy-peasy.

Dominic in a less than sensible moment had agreed to come along too. Off we went, leaving TAC at 7am, arrived in good time at the ‚route crossing‘ point at which time I dived into the Garmin menu and started the navigation.

This worked very well for about 3 minutes until the incensed beeping started. „U-turn as soon as you can“. We did. Much to the excitement of a tuned-up Subaru driver. Found our left turn, now a right turn facing the opposite way, but all good as it counted down the metres and indicated where to go.

A short, sharp climb. Of course, it’s Tom’s route, remember. Then it dawned on me. I knew where I was. This was where Adam had introduced me to some mountain bike trails behind the golf course, near the top of the climb, back when I wouldn’t be seen dead in lycra shorts. Those were the days.

Anyway, I digress. We progressed at this point rather well indeed, many lefts and rights, and all very straightforward to follow. Of course, absolutely no idea whatsoever where we were, but we had GPS so who cared. If I’m honest, a couple of wrong turns, soon corrected, but all in all, pretty good.

Or so I thought.

We cycled past Tokaichiba station and then it went kind of awry. The Garmin wanted a left turn and common sense said straight on. Dominic suggested topping the water bottles off and then decide.

That done, we, well me really, decided to follow the Garmin. It had done an excellent job to this point so give it the benefit of the doubt.

This is Tom’s route..

This is NOT Tom’s route.. 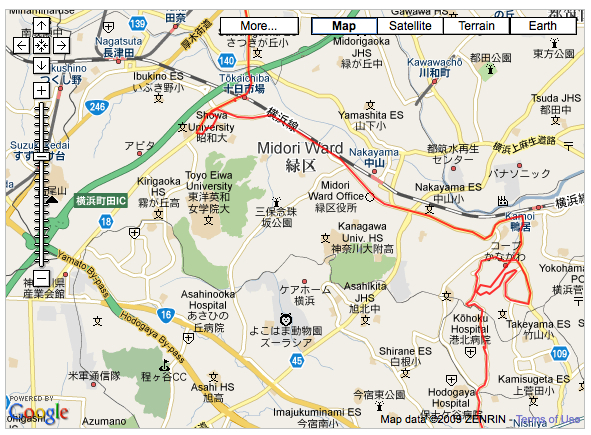 With the Garmin spending more time re-calculating (note to the manufacturer, this should be replaced with „thinking“) and then getting stuck and in need of a re-boot, then telling us to turn right, and me ignoring that every time, well we ended down on Route 16 with a dilemma.

We both needed to be back in central Tokyo by 1pm, which meant we had an hour to play with. Continue for 30 mins then U-turn and head home? Na. Go now. We headed along Route 16 until Route 1, then hammered it.

I didn’t achieve my goal.

I didn’t see the sea.

I did get out on the bike and had a great ride in broody, overcast conditions.

I trust Tom, Michael and James are proving to be speedier up at the Xmas Enduro