With the kids already banging on the door wanting to play and the wife eagerly in preparation for the 紅白歌合戦, there is little time for reflection of a full year. Nevertheless here in short are some POSITIVO and some NEGATIVO points about the cycling year 2009.

Much more riding done than in any other year, most of it spend in the countryside and in the mountains. I just checked my records for the year and I did more than 12,000 km in total, climbing more than 130,000 meters up. This is mainly thanks to part-time teaching and full-time unemployment. Although, less riding in 2008 with a meaningless job was economically better. As a result I was in the form of my life and it is hard to get any better than this.

2009 was also the year of riding exploration. Mostly with Ludwig, from January to December we were constantly looking for new roads in the greater Kanto area and we found many great, steep, quiet and beautiful roads. Chichibu was a treasure box that was too long closed for us: Mitsumine Jinja, Arima Toge, Haccho Tunnel …. beautiful rides indeed. But we also discoved some new roads in the Western and Southern parts. I am a little bit worried of what remains to be found, therefore the conversion to cyclo-crossing.

I enjoyed many rides with varying members in varying speeds. As usual I rode out with Ludwig, David, Tom and Jerome, probably the Positivo hard core members. But I also rode a lot with Dominic, who contracted me as his coach for the 2010 L’etappe du tour, which was good as well and very exhausting as I needed to look up all references he quoted on Google when I came home (Gladio). I also rode with Laurent, who is always good company and with Graham and Michael. And with James and Dominic in Izu at the beginning of the year. Many variations, a lot of good talks, never boring.

We finally have a nice team wear. In orange. It took some time to get everything organized and after the jerseys turned out to be not the same size as the samples, it took additional effort to make everyone happy but the result is a good one. We are the best looking cyclists in Japan and Positivo Espresso claded guys are on the way to world domination.

I was also very proud that Ludwig became JCRC D-Class champion this year. About 99% of this success is due to his hard training and riding abilities, the rest is shared by a good bike and me passing on all the knowledge I have gained in 2008 by attending the JCRC racing series.

Thomas and Hombeline. If I chose one story and blog entry of 2009 my choice would be this wonderful story. One could never invent such a story but life brings them to surface from time to time. 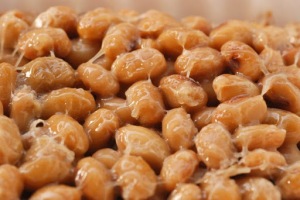 Traffic accidents. David, Bryon and me this year. Bryon was the worse but it wasn’t easy for all of us to recover and to get back on the bike. David is still in the process and I hope everything will become all right eventually.

As every year I was sometimes frustrated by our „undiscliplined team“, or a lack of team discipline. Or a lack of team discipline as I would like to see it. But this is more a problem of my own personality than that of the team. I continued to be active in this and that and I expected that everybody else will show the same level of activities, ethusiams and priorities. Which was not the case always and which I must learn to tolerate I guess.

Useless and meaningless roadworks. This is a topic that has been much remarked on in many posts. The amount of money spend from the tax payers pockets or, since this year, in majority from the issue of new state debt on useless large scale road works is just unbelievable. And all of this needs to be maintained which costs even more money. Most Positivistas might agree with me that one of the most useless construction projects we have encountered this year is the Shinkansen station at Waseda–Honjo. What was a wonderful idea in the 50ties, 60ties and 70ties, to invest in the upgrade of the infrastructure of the country, continues to be done until today without adding any value to the competitiveness of the country or to the benefit of its population. Change?

Last Ride of the year

Having everydone which possibly could have been done this year, I thought I spend the last morning of 2009 on the bike.

Because of a serioud lack of creativity, I chose to ride along Tsurumikawa to Onekan and continue to Yabitsu afterwards. Depending on the time, the general feeling and pure random, luck I considered also the options to ride up Hakone or ride back along the coast to Kamakura. Or commit suicide at the entry to Mikkuni Toge.

Of course I overslept in the morning – too much good food and good wine the night before must be held accountable but not me! The weather was OK, cold but sunny but there was a strong headwind an even with the HRM up to 160 I continued in the 20 -25 km/hr speed bracket along the Tsurimikawa. But it would come even worse: Once on the Onekan I got overtaken by two cyclists (none of them Deej from TCC). I felt miserable, a worthless piece of rotten human flesh, useless for any sportive activity and waiting to be thrown in the garbage bin for recycling. I guess nureachiba (濡れ落ち葉) is the Japanese word I am looking for; wet, fallen leaves that stick to the shoes of the diligent wife.

I took a turn on the tankroad and continued through Hashimoto to the North Tsukui Lake Road. Wonderful as always and completely quiet. It is like a road through a spellbound forest and the rather technical name does it no justice.

There are many things to see and many magic things that can happen there. There is the weekend house of the Colombian drug lord (or is it the house of Fujimori from Peru?) with the old Land Rover parked in front of it for a speedy escape. There is another house which is ornamented with old bicycle rims. Once riding there, I encountered a herd of monkeys just crossing the road in front of me. Today while riding, snowflakes gathered on the front of my Assos jacket. And once, I was riding with James and Ludwig, a mountain witch jumped out from the bushes, pointed her magic wand at my bicycle and said:

„Thou shall not speak badly about Single Speed Bicycles“

And with a small „plop“ and a very small lighting, a cloud appeared and when it went away my Cervelo was magically converted to a single speed. Ask Ludwig or James, if you do not believe this story.

So instead of North Tuskui Lake Road, perhaps we can name this road „Magical Single Speed Monkey Forest“?

I then continued to Miyagase Lake, not looking at the Christmas tree but making the ascent up. I was a little bit worried after Jerome has told me that he slipped on ice there, but the road was free of snow and ice. I was also worried about the weather, there were some dark clouds and it had lightly started to snow at Tsukui. It reminded me of the first time when I went up Yabitsu with Juliane and we got soaked in the rain. The road was also very quiet, I encountered maybe ten cars on the way up and no cyclist at all. I made it to the pass in a little bit more than 53 minutes – not too shabby for this time of the season. Reconfirmed, that I am not useless at all, I took a photo in front of the „Quansi Nationalpark“ which might become one day the centerfold for Silver Riders or something like this. 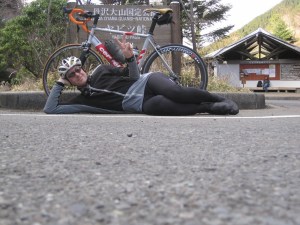 I did all of this in one go from my house without any break in about 3:45 hours.

The weather continued to be good and I made my way down on the south side. There were good views from the observation points just as James and Ludwig have seen them on their last ride over Yabitsu. Fuji-san was also visible for the last time of the year.

2009 has been a year of constant exploration of new roads, so I thought that I should also try something new on this last ride. So after the hairneedle curve and the observation tower I took the forest road down to Hadano. There is a gate on the top which is no real obstacle for a man and bis bike. Interestingly enough there is also a security camera mounted on a pole next to the gate. 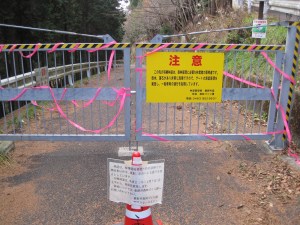 The road is rather steep but in very good shape and there is not too much debris on its surface. Going down isn’t so much fun, but this might be a nice alternative to climb Yabitsu from the South side (which we rarely do anyway).

The rest was boring: Down to Hadano, Bento capital of the world and back by train to Yokohama. But a nice last ride for a good riding year and a good chance to reflect on the whole year while riding. 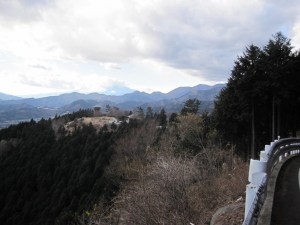