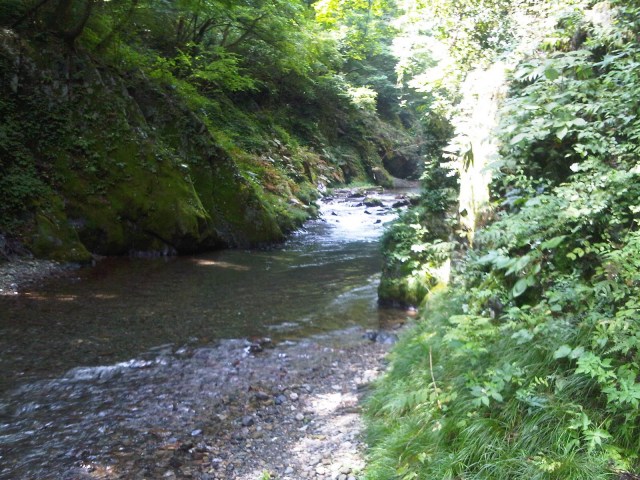 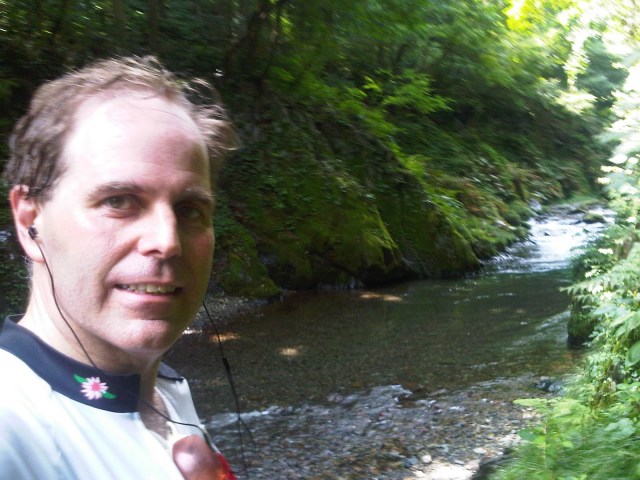 I awoke later than expected at 5:55AM and quickly checked my email for any responses to my „call to ride“.  Jerome had left a note that he is off to France this weekend.  Ludwig had left a  note inviting me to join him and Tom at Koremasa Bridge at 6:15.  They would be on cyclocross bikes, giving me a fighting chance to keep up … until the first hill or offroad section, but I was way too late to make the rendezvous.  Instead, I took my time and left home a little after 7AM.  The air was heavy as a ton of bricks as I stepped outside, and it did not get any better along the Tamagawa.

But I made decent time to Itsukaichi, stopped at the traditional „last convenience store“ 7-11 for food and water, then rode to Motojuku (Honjuku?), the „T“ intersection where a left turn heads up the S. Fork of the Akigawa toward Tomin no Mori and Kobu Tunnel, and a right turn takes one up the N. Fork toward the infamously steep Kazahari „rindo“ climb, or the road over Nokogiri-yama and down to Oume/Okutama.

Just 50 meters after the left turn, there is a perfect swimming hole in the S. Fork of the Akigawa.  There are 40-50 stone, then metal steps all the way down to the water, and it is possible to take your bike down the first few steps and leave it resting against bushes/grass, out of sight from the road — this to avoid the experience Jerome had in Hyogo Pref. outside of Kobe 2 weeks back, when his Look 585 was stolen while he bathed in a river.

The water was incredible, and it was easy to walk up a shallow stretch of the stream to a 1-meter deep pool where I could soak for a few minutes — a better coolant I cannot imagine.

I remounted and made it up to and through the Kobu Tunnel and back down to Uenohara, then hopped the train home.  Too hot for much more.