With Paris-Brest-Paris coming up this year, a lot of people seem to be interested in randonneuring. They like the idea of a challenging, but not competitive, sport. Many brevets feature great scenery, a sense of adventure, and wonderful people to ride with. Unfortunately, all too often, I hear people say: “It sounds wonderful, but I couldn’t do it.”In many cases, that isn’t true. Most randonneurs, myself included, are pretty average people. Here are ten common misconceptions about randonneuring:

1. It takes a huge amount of time.

Randonneuring is a sport that doesn’t require a lot of training. If you are a moderately fit cyclist and able to ride a century without much trouble, you can start randonneuring now.

Riding 600 km in 40 hours may seem beyond what average cyclists can do, but like so many things, it just takes a little training. You build up to it, just like you built up to your first century. Fortunately, nobody starts with a 600, and the 200, 300 and 400 km brevets are great preparation for the “big one”. And remember that these numbers are in kilometers. Translate a 200 km brevet into 124 miles, and it sounds more do-able straight away.

3. You need a special bike.

Bicycle Quarterly has done a lot of research on what makes an optimized randonneur bike, but you can use any bike for randonneuring. One of my friends rode several seasons, including PBP, on a carbon-fiber LeMond (above). Another friend rode a 1980s Trek on many brevets, including a 24-hour Flèche Vélocio. You can ride any bike.

A true randonneur bike will be a bit faster, quite a bit more comfortable, and probably more reliable, but you don’t have to have one. Unlike racing, where a poor bike choice will have you dropped on the first hill, randonneuring can be done on almost any bike. 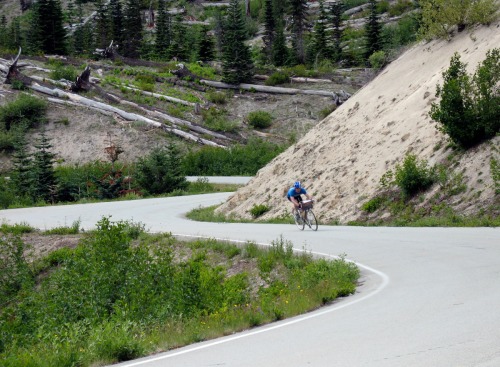 4. It’s only for cyclists who are fast.

The most prestigious randonneur ride, the 750-mile Paris-Brest-Paris, requires an average speed of 8.3 mph (13.3 km/h). Most cyclists ride faster than that. Completing a brevet within the time limit has more to do with keeping your stops short and planning ahead than with riding fast on the road.

5. It’s only for cyclists who are slow.

Randonneurs ride at all speeds. It’s not uncommon for the first riders to average 22 mph or more, while others ride at half that speed. Whether you like riding fast or slow, you’ll find plenty of company among the randonneurs. And unlike racing, there is no ranking, and no implication that the faster riders are superior to the slower ones.

Compared to most sports, it’s remarkably cheap. Most brevets cost between $ 10-60 to enter. You can use almost any bike. You’ll need some money for food along the way. Assuming you have a bike, you could do a full randonneuring season on less than $ 300.

It’s often best to pack your own food anyhow, since the food choices in rural America are limited (above). Sometimes you are lucky, though, and volunteers at a control serve homemade soup or chili!

7. It’s all about riding more miles.

It’s true that most RUSA awards require you to ride more miles. But randonneuring is a big tent, and anybody can find their own challenges and joys. For some, it’s riding a 200 km every month of the year. For others, it’s reaching those mileage goals. Others challenge themselves to improve their personal bests through the Cyclos MontagnardsR80/R70/R60 program. And yet others just enjoy riding with friends and discovering new courses. All are equally successful randonneurs.

Riding through the night is a new experience for most cyclists, but with a little bit of planning, there is no need to ride when your head drops and your bike veers. Many randonneurs sleep every night even during long rides.

I find that after a long day in the saddle, I really enjoy riding at night. The glare of the sun is gone, the wind usually dies down, and the sounds and smells are different. There is much less traffic. And mountain rides under a full moon are unforgettable experiences. If I get sleepy, I pull over and rest for a while.

Like most activities, cycling can be dangerous, and randonneuring is no exception. There have been some accidents. In some cases, courses went on busy roads that see lots of drunk driving. Most organizers now try to stay away from those. A few riders have crashed when they became too tired, yet continued to ride. Most riders now know better than to ride when they are too tired to do so safely. So choose your courses carefully and don’t push beyond what is reasonable, and you should find that randonneuring is safe. 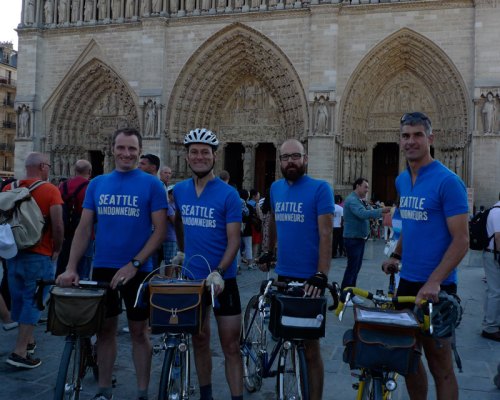 10. You need to worry about complicated rules.

Randonneuring does have rules, but they all make sense: Obey traffic laws and don’t get lost or take shortcuts, and you’ve already covered 90% of what you need to think about on the road. The rules are on the books so that things are clear, and there are no ad-hoc decisions, but most of the time, riders don’t need to think about them.

Here is what randonneuring is in a nutshell: Cycling with like-minded friends, on beautiful roads, while challenging yourself to ride better than you ever imagined. How you define “better” is up to you. Better can mean faster, more miles, more fun, more… or a combination of the above.