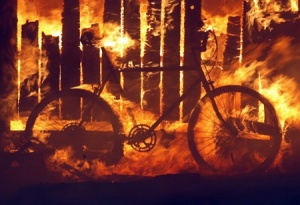 A lot of kilometers done this year and out of them a lot of them again in the mountains. I felt very strong and confident in July, September and October and was ready to take it up against whosoever.

We had a good team this year. Nearly everybody showed up for some of the tours or to attend some of the races. We did a lot of rides with Tom and also Marek became a good addition to our team. Sometimes we lured fresh riders into the mountains – such as the correspondent of the Far Eastern Economic Review.

Some good racing results, in particular as a team. Shuzenji, despite the rain, was a spectacular race and I still remember the excitement when Tom just made his last lap seconds before the 5 hours deadline. Also the Motegi race and the Hitachi-Naka race were good.

Good team spirit again. Jerome was really pulling David and me on the third day of Noto when we were close to give up. Also I enjoyed to drink the evening before the race with everybody.

Bought a lot of new stuff for my bike and myself, as usual I am spending 80% of my investment in cycling on clothes and only the remaining 20% on bike parts. My Cannondale bike is now more than 7 years old.

Many new tracks discovered and some of the older ones were beautiful this year. Yabitsu Toge is still one of my favourite rides (unfortunately the way home on 246 is a disaster). Went up to Hakone as well this year, which I find the most challenging climb. Missed the Hamanako loop this year as well as the Wada toge. Also I was not too many times in Miura Hanto and at the sea.

Someone „touching“ the back of a car. Someone „slipping“ over the hood of a car. Myself crashing at the Saiko race. Too many accidents this year.

Rain. Just too much rain this year. On a lot of rides we came into the rain. And then spend time at Family restaurants. Even the longest ride of the year, to Matsuhime (with Jerome, david and Marek) was partly in the rain. I went on a social trip to Tamajiman with David and david and on the way back I found myself alone on pouring rain at the Tamagawa. Thunder just next to me. Some of the races were in the rain (Motegi was so cold) and also some of the tours (Sadogashima was sooooo cold). We were lucky in Noto although and I somehow I have come accustomed to the rides in the rain.

My bike. After the crash I somehow lost the confidence in it to take me safely here and there. Will spend some money in 2008 to buy a new bike (actually I bought the frame already). As usual, the cost of the bike should be somehow in relation to my own performance, so LIGHWEIGHTS are a no go.

I tried to organize some of the races and longer rides in 2007 but the overall reaction was not overwhelming. It was somewhat disappointing to put some effort into these things and despite that not being able to create any interest.