Greetings from Kyushu!
Kurokawa Onsen is the most beautiful onsen town I know of. There are no big hotels, not tour groups and buses, each ryokan looks very nice and serves great food, and the village itself looks very beautiful. This time, we stayed at a ryokan four kilometers upstream out of town, which meant there was even more nature around the place than there is already inside the village.

Kurokawa Onsen is located ideally for doing some great cycling rides. Just north-east of it lies the Kuju Plateau, with a couple of peaks around 1,800m and the famous Yamanami Highway passing through it. South of it lies Aso-san with its huge outer crater which fits a lot of villages and farm land. In the middle of the crater rise the peaks of Aso-san. In between there are bizarre looking hills formed by what Aso-san once spat out when it was even more active than it is still today.
We have been visiting the area quite often over the years, but this time I wanted to experience it on my bicycle. It is just a different feeling – one sees even more of the great beauty.
With breakfast in the ryokan being served relatively late, I was able to start only at 10am and thus do only a relatively short ride. But it was sufficient to surround and climb Aso-san. 122km in total, with 2,000m of climbing (the only flat stretches in the area are on the bottom of the outer crater rim – everything else is hilly!).
Just as I was returning to Kurokawa Onsen, the cable for the front dérailleur tore inside the left gear shifter. Very strange. Is this normal wear and tear after 13,000km? Or was it caused by taking the bike onto the plane where the left gear shifter was sticking out of the bike bag and was protected by just a bit of foam wrapped around it? Hopefully I can get it fixed today, so I can try another ride tomorrow – though no longer in Kyushu.

At the south-eastern rim of the active creater – the highest view point was accessible (and free to bicycles), though due to relatively high levels of gas in the air, not all areas where open. Still, this was my luckies visit so far: upon three prior attempts, either was the weather bad or the access to the crater rim was blocked 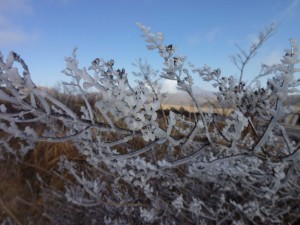 It was cold – and icy wind. Maybe not surprising I did not see a single cyclist all day! 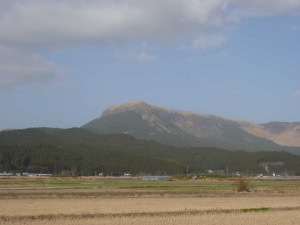 Daikanbo – an impressive part of the outer crater rim 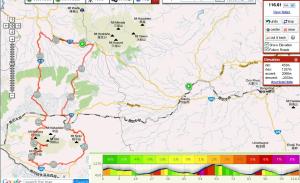