How to built up this Maurice Woodrup Frame from the Fifties? 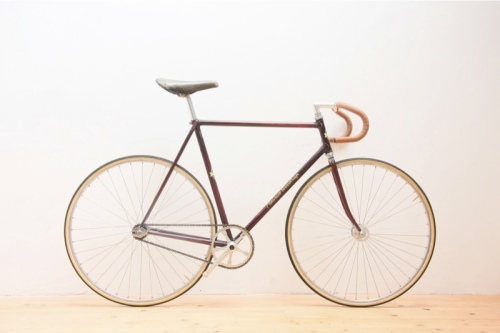 Some advice given to the builder:

Dear L., as for the Woodrup frame I think that you are standing now at an interesting crossroad in your life as bike mechanic or bike collector. Basically, there are two roads to follow, both have positive and negative side effects:

A)   You built the frame with components that are matching to each other and from the same period, manufacturer etc., so basically you try to emulate a bike from the past that could have been running on the tracks in, say, 1976. Collectors will clap on your shoulder and say, “well done”, or perhaps make the one or other critical remark about some details. This will leave you with less room for creativity, you have some choices but they are limited and can be done only in view of the overall period or concept. This will also be very expensive but you will end up with a very nice bike that also has re-sale value.

B)   You follow your own taste and mount components on the bike that are economical, good looking and functional. Of course you will also take a look at if they match with each other, but you wouldn’t mind to combine Sturmey-Archer from this century with Campagnolo from the last one. You will like the outcome, but perhaps you will also have the nagging feeling that something isn’t quite right. But Ok, it was your choice. The bike has no re-sale value, only the frame itself.

My point is, that although (B) seems to be the reasonable way to go, it is not such a straight forward decision at all. If you stop building bikes at that point, (B) would be the answer. But when you continue, you will find that over time your standpoint moves towards “period-correct”. Because all you people you deal with and have a professional opinion will state “period correct”. And slowly, you move towards period correct. You will find it hard to mount Shimano brakes on a bike with Campagnolo gearing. It would function well, you have done it before, but for some reason it is … weird. And then you will take a look at your old bikes and wonder “What could I have possibly thought to do …this?”

I have at least one bike in my stable which I am afraid to look at. Orange handle bar tape? Modern tyres? Why have I done that?

Let me know what you think, depending on your viewpoint I can give you some advices to follow either road A or road B.

Eine Antwort zu “How to built up this Maurice Woodrup Frame from the Fifties?”